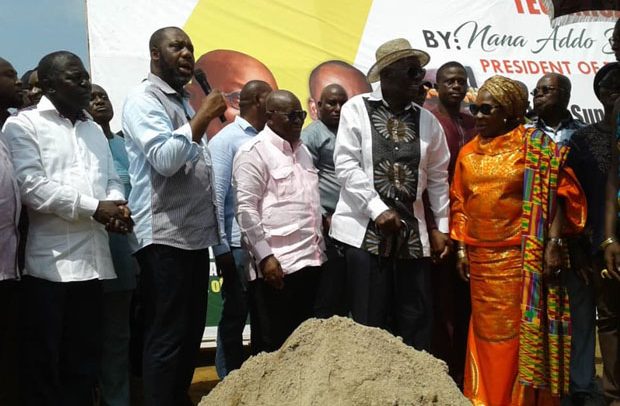 PRESIDENT NANA Addo Dankwa Akufo-Addo has officially cut sod for the construction of a multi-purpose John Agyekum Kufuor Senior High Technical School at Dabaa in the Atwima Nwabiagya District in the Ashanti Region.

The school, which is expected to be completed next year, is being constructed to honour former President John Agyekum Kufuor for his contribution to the development of the country.

Significantly, the school is being constructed at Dabaa—Mr.  Kufuor’s home town—to serve as motivation for the youth.

President Akufo-Addo who took personal interest in the building of the school said, “This project is to honour my former boss for what he did to transform the state. You deserve to be honoured for what you did for Mother Ghana.”

Going forward, he stated that technical and vocational education would be given maximum attention by the government and said countries that invested heavily in that area of education had been transformed now.

Former President Kufuor, who was overly excited, said his nephew, the late Apagyahene, Oheneba Kwame Kyeretwie Prempeh, had planned to construct a school at the site where the President is honouring him with the building of the school.

He thanked President Akufo-Addo and his government for doing him such a great honour whilst he is alive. “I want to share the glory with the late Apagyahene for his deep sacrifices for Asanteman and Ghana,” he added.

“I have repeatedly mentioned Oheneba Kwame Kyeretwie Prempeh because aside from his splendid works, he has also blessed us with a son, Dr. Matthew Opoku Prempeh, and through him we have the Free Senior High School (SHS) policy,” he added.

Mr. Kufuor also supported President Akufo-Addo’s decision to invest in technical and vocational education, pointing out that a country like Germany pursued similar programmes and it has worked for its citizens.

The current Apagyahene, Oheneba Owusu Afriyie, praised the President for the school project and tasked the contractor to do a good job by completing the project at the stipulated time.

The Ashanti Regional Minister, Simon Osei Mensah, said it was a good thing for President Akufo-Addo to honour former President Kufuor whilst he is alive, adding that the country should always honour its heroes.