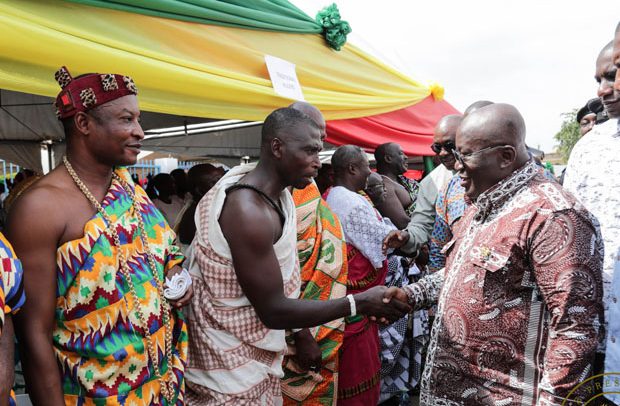 The President, Nana Addo Dankwa Akufo-Addo, yesterday began his three-day working tour of the Greater Accra Region to a rousing welcome by chiefs and people of the region.

As part of the tour, the President inspected some ongoing works, commissioned some completed projects and cut the sod for new projects to commence. Besides, he interacted with chiefs, students and tutors at some selected educational institutions.

He started the day’s tour from Bortianor-Ngleshie-Amanfrom and also moved to the Amasaman Constituency to meet and interact with the chiefs and people of Ga West, Ga North and Ga Central at Nsakina.

In the Trobu Constituency, the President inspected the progress of work at the site of the Pokuase Interchange and proceeded to Dome to inspect ongoing works on the Dome-Atomic road to Taifa Junction in the Dome Kwabenya Constituency.

Addressing some chiefs and residents of the region, the President stated that the opposition National Democratic Congress (NDC) would cancel the Free SHS policy should the party win the 2020 general elections. He, therefore, called on Ghanaians not to return the NDC to power again.

Some traditional leaders of Ngleshie Amanfrom urged the President to take immediate steps to resolve the administrative boundary dispute between Amanfrom in the Greater Accra and Central regions.

Addressing a durbar of chiefs and people of Ga South and Weija Gbawe of the Bortianor /Ngleshie /Amanfrom Constituency, Nii Kwarshie Gborlor IV, Ngleshie Amanfrom Mantse, said the boundary dispute was causing a lot of confusion in land title registration in the Amanfrom catchment area.

“We are pleading with you Mr. President to take immediate steps with the support of your appointed officers to determine the actual boundary line between the two regions and resolve the issue for peace to prevail,” Nii Kwarshie Gborlor IV said.

The President, in a response to the request of the chiefs, indicated that he had taken notice of the request, adding that processes would be initiated to get the matter resolved.

“On the boundary issues you raised, my administration will take a serious look at it and resolve the issue. It is an issue that has prevailed for a long time and it needs to be resolved,” President Akufo-Addo stressed.