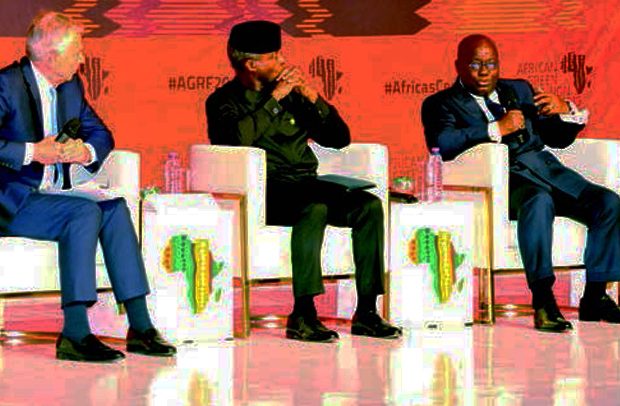 President Nana Addo Dankwa Akufo-Addo has stressed the urgent need for African leaders to confront the challenges impeding the development of agriculture on the continent.

Delivering the keynote address at the 2019 Africa Green Revolution Forum (AGRF) in Accra on Wednesday under the theme:  ‘Grow Digital, Leveraging Digital Transformation To Drive Sustainable Food Systems In Africa’, President Akufo-Addo said the time has come for leaders on the continent to act without delay.

“The inability to take advantage of the wealth of arable land and water that we have at our disposal is an obstacle we must surmount,” he said, adding, “If you take the Volta River and its tributaries, for instance, Ghana has the potential for all-year round farming.”

“We, certainly, cannot excel if we do not figure out how to tap the immense resources and opportunities at our disposal,” he pointed out.

He said the government of Ghana would to tap into the massive potential that agriculture presents, indicating that “we believe the majority of people can only feel a change in their lives when we develop agriculture, which will bring in its wake rapid economic growth, job creation, reduction in the phenomenon of rural-urban migration, improvement in the resilience of communities in the fight against climate change, and achievement of the 2030 United Nations Sustainable Development Goals.”

President Akufo-Addo disclosed that his government was pursuing a ‘National Investment Plan’ for agriculture over the next four years titled ‘Investing for Food and Jobs’.

“We have rolled out a comprehensive, ambitious and innovative set of policies and programmes tailored at addressing long-standing problems of the sector. The strategy is to prioritise actions that directly support farmers. We are rolling out a set of strategic flagship interventions in the various sectors of agriculture, under the programme for Planting for Food and Jobs (PFJ),” he highlighted.

He talked about the five main modules under the plan which include food crops and tree crops, where there is currently a programme called ‘Planting for Export and Rural Development’ (PERD).

“Our strategy is to develop the selected tree crops, each to earn as much as cocoa is currently earning for Ghana, i.e. US$2 billion, annually. Thus, at full capacity, we are targeting to rake in additional foreign exchange of US$12 billion per year,” the President said.

Present at the forum were four other heads of states, including President Mahamadou Issoufou of Niger, Yemi Osinbajo, Vice President of Nigeria, and Edouard Ngirente, Prime Minister of Rwanda, who joined President Akufo-Addo in a panel discussion moderated by former British Prime Minister, Tony Blair.

Former Prime Minister of Ethiopia, Hailemariam Desalegn, in a solidarity message, expressed appreciation to President Akufo-Addo for the commitment and leadership in his quest to transform the Ghanaian agricultural landscape.

“I was in Ghana rural areas the day before yesterday, I have seen with my own eyes that Ghana’s agricultural transformation is in the making. This kind of leadership is much desired in our continent,” Prime Minister Desalegn stated.