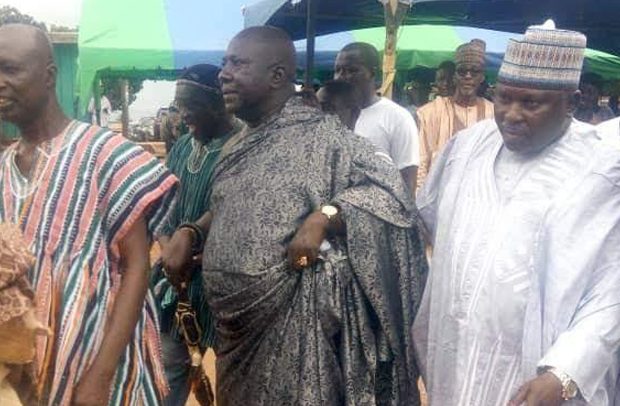 The Akwatia Chief And The Zongo Chief

SOME Youth of Akwatia Zongo, in the Denkyembour District of the Eastern Region, are up in arms against the chief of the area, Osabarima Kofi Boateng III. According to the youth, the chief is attempting to illegally impose a new Zongo chief on them despite the fact that they already have a gazetted chief in the person of Sarki Alhaj Rabiu Adams.

According to the youth, Osabarima Boateng imposed one chief on them some time ago, who was resisted through a court action brought against him. They added that before the court could sit on the matter, the man whom the youth claimed does not hail from Akwatia, died, leading to an abrupt end of the case.

They stated that, as such Sarki Adams was legally and officially installed through proper Zongo customs and practices and has since been endorsed by both the regional and national houses of Zongo chiefs.

Despite the installation of Sarki Adams, the Akwatiahene in a video that has gone viral, believed to have been taken during the one year anniversary of the demise of the former Zongo chief, said he does not recognize the new chief. He has therefore instructed the Dagomba chief of the area to act as Zongo chief until he – the Akwatiahene – installs a new one.

But addressing a press conference, spokesperson of a group calling themselves the Concerned Akwatia Zongo Youth, Osman Ali Abubakar, asked Osabarima Boateng III not to attempt to impose a chief on them, saying any such attempt by the chief will lead to the breach of the peace and unity the people of the town are enjoying.

The angry Concerned Youth have also called on the Okyenhene, Osagyefuo Amoatia Ofori Panin, and the president, Nana Addo Dankwa Akufo-Addo to intervene to curb the brewing tension.

According to the youth, despite the fact that the elders and kingmakers have pledged their allegiance to the Akwatia Stool, they shall resist any attempt by any person or group of persons to impose their will on them.

He stated that no chief or any other person outside the Zongo community installs a chief for them, adding that when it comes to the installation of Zongo chiefs, it is solely done by the customs and traditions of the Zongos.

He added that their outfit recognizes Sarki Adam as the rightful chief of Akwatia Zongo.