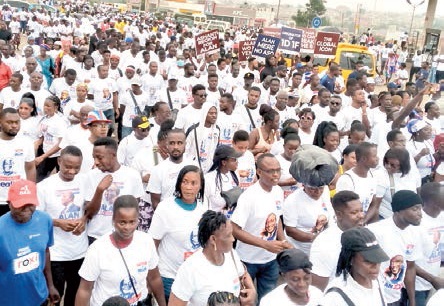 Thousands of supporters and fans of Trade and Industry Minister, Alan Kwadwo Kyerematen, lined the streets of Kumasi, the Ashanti Regional capital, at the weekend for a walk despite sanction fears.

The health walk, according to the organisers, was an opportunity to send a message to Mr. Kyerematen that it is his turn to lead the New Patriotic Party (NPP) as flagbearer.

It was christened: “Aduru woso” [to wit; it’s your turn], and was patronised by some stalwarts of the NPP, including Hopeson Adorye.

Clad in branded NPP T-shirts with pictures of the Trade and Industry Minister embossed at the front, the participants began the walk from the Bekwai roundabout.

The fans were asked to desist from embarking on the walk which appears to be a form of campaign activity in the face of recent statement issued by the NPP General Secretary, Justin Frimpong Kodua, warning aspirants and party executives not to hold meetings or campaign in breach of the Code of Conduct.

The statement explained that in line with Articles 2(3) and 244) of the NPP’s Constitution, the Code of Conduct seeks to foster the spirit of healthy intra-party contests by guaranteeing equal opportunity for all stakeholders.

“For emphasis, the Code of Conduct provides in Section 1 (f) that: Members, supporters, sympathisers of the party at all levels shall desist from using their public office or portfolio within or outside the party to promote the interest of any prospective presidential or parliamentary candidate in order to gain unfair political advantage,” the statement indicated.

It warned that failure to comply with the directive may lead to huge consequences and sanctions against such offending officer, member or prospective aspirant in line with the grievance procedures stipulated in the Code of Conduct.

However, the political gathering was in full swing to woo Mr. Kyerematen, who has an eye on the presidency, with the fans claiming that many people are counting on him to contest the NPP presidential candidacy, ahead of the 2024 general election.

Even though Alan Kyerematen has not officially declared his interest in contesting the NPP flagbearership race, his supporters said the mammoth crowd at the walk showed how Ghana is eager to have him as a leader of the country.

Some participants stated that they were convinced they could create jobs and put cash in people’s pockets per his mantra: “Job for the People and Cash for the People.”

They contended that the unemployment situation could worsen with more Free SHS graduates coming to join the job market.

For them, Ghana needs Alan’s ingenuity to transform the country and push its development to another level.

Holding several placards and banners with inscriptions such as “Aduru wo so [to wit; it’s your turn]”, “The right person for the job”, “Yenim wo firi tete [We know you from ancient of days]”, “Break the 8 with the unifier”, featured at the walk.

The walk, led by people calling themselves “Special Interest Groups in Ashanti Region,” offered opportunity to the Alan fans to hit at the marketing points of their idol to the media.

Addressing the media, former Member of Parliament (MP) for Nsuta-Kwaman-Beposo, Kwame Asafo Adjei said, “We came today as men and women of Asanteman with special interest in the development of Asanteman and all allies to embark on a health walk. It is non-political as speculated.”

Some former MPs and ministers who served in the erstwhile John Agyekum Kufuor administration also patronised the walk.