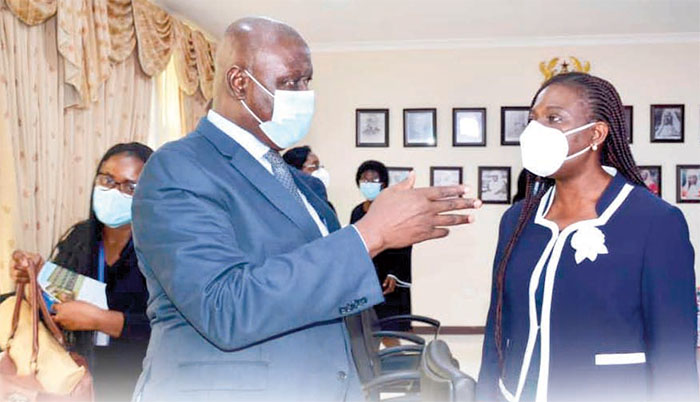 The Chief Justice interracting with the Director of Public Prosecutions

The Director of Public Prosecutions (DPP), Yvonne Atakora Obuobisa, has revealed that convicted criminals are using fictitious court records to overturn their sentences at the appeal level.

According to her, the Attorney General’s Department has realised that some individuals are using such fraudulent “certified true copies” of the court records to overturn their sentences at the Court of Appeal in particular.

The DPP also expressed concern about the uncoordinated manner in which appeals were heard, such that convicts were able to use such fictitious court records to appeal against their sentences in more than one Court of Appeal and in most cases succeeded in getting their convictions overturned.

She mentioned for example, a situation where appeals of convicts were dismissed by the Court of Appeal in Accra and some of those convicts then used the fraudulent court records to file another appeal in a different court of appeal in either Kumasi, Tamale of Koforidua to get the conviction overturned.

Mrs. Obuobisa granted the interview when she accompanied the new Attorney General, Godfred Yeboah Dame, to pay a working visit to the office of the Chief Justice, Anin-Yeboah.

She gave an instance where a convicted armed robber was able to use such fictitious court records to overturn his convictions on multiple occasions and went back to commit the same crime and nearly killed his victims in the process.

She indicated that he managed to get his conviction overturned using the same fraudulent records and the AG’s Department was set to pursue the matter at the Supreme Court.

“We have realised that there are a few problems – one has to do with fictitious records so we have a number of appeals where we have realised that you have certified true copies, they have been certified but the records are false. Then there is also the uncoordinated manner in which the appeals are heard, and it is both the Judicial Service and our office (AG’s Department).

“So you have a matter which is heard in Accra, the Court of Appeal sitting here, the appeal is dismissed. The appellant then moves to the Court of Appeal in Koforidua or in Tamale. Another Court of Appeal differently constituted is served with another record meanwhile the matter had been heard here (Accra). Our office is also not coordinated enough to realise that this matter has been heard.

“So I think this is something we must find a way of syncing the appeals, both in our office and in the Judicial Service,” she suggested.

Mrs. Obuobisa also expressed concern about the current jury selection system which she said was problematic and called for the need to amend the laws for the administration of justice to be smooth.

She was particularly concerned about the use of “professional jurors”, some of whom have been in one court for close to 15 years and have therefore, become known to everyone and can easily be compromised.

“I think that at the heart of it is an amendment to the law and to get this whole jury system scrapped. But before then we also had the issue of professional jurors. There are some who have been in particular courts for over 12 years. Everybody knows them, you know where they live, they can easily be approached and they can easily be compromised. So those ones, at least they should be moved around because they have been in a particular court for about 13 years, there are some, 15 years in the same court. That is too much.”

Again, Mrs. Obuobisa expressed concern about the slow pace of cases, especially high profile ones due to lack of proper case management in some courts.

“There are times where witnesses are flown from other countries, you have agreed on a time, yet defence counsel would deliberately say that “we cannot come” on the time which counsel and court have agreed on and then the witnesses go back and they are unable to come. It is very frustrating because we don’t compensate the witnesses for their travels,” she stated.

Chief Justice Anin-Yeboah made a passionate appeal to the DPP to report the use of any such fictitious court records once detected; he could take actions against the responsible judicial officer.

“If it turns out that the registry of a court, be it a trial court or an appellate court, has prepared a fictitious record just to assist in the acquittal of a convict, please try and let us hear, for us to take immediate measures, because if we are not very careful it would certainly be perpetuated as if we are gladly endorsing it when we have no knowledge at all,” the CJ noted.