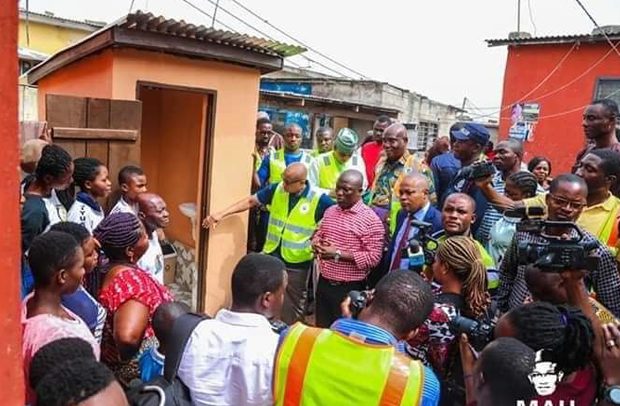 The Accra Metropolitan Assembly (AMA) has denied media reports claiming that the Minister of Inner City and Zongo Development, Mustapha Hamid, as well as the Mayor of Accra, Mohammed Adjei Sowah, both refused to wear face masks at the ‘joint-commissioning’ of a one seater latrine in Accra.

In a statement, the AMA recounted that although the said publications did not confirm when this event took place, it states that both the Minister and the Accra Mayor appeared at the commissioning ceremony without Facemasks, “mischievously suggesting that the event took place amidst the Covid-19 pandemic.”

According to the AMA, “there is no iota of truth in the publication and that the said event which took place as far back as January 20, 2020 was an inspection of some 250 completed household toilet facilities constructed by the Akufo-Addo Government for residents of Jamestown and Chorkor at no cost to the beneficiaries.

“This is a sad example of bad journalism that we must endeavor to eradicate from our public discourse. Our checks indicate that the said online portal is managed by faceless individuals who put up stories deliberately to malign people for political reasons,” the statement signed by Gilbert Nii Ankrah, Head of Public Relations, AMA, says.

AMA assured the general public that as an institution, it would not undertake any activity or event especially during this time of Covid-19 without adhering to all the safety protocols including the wearing of face masks.

“The Assembly is by this response urging the general public to ignore the said publication and treat as propaganda and mischief intended to attack and discredit the hard-earned reputation of government officials,” AMA says.