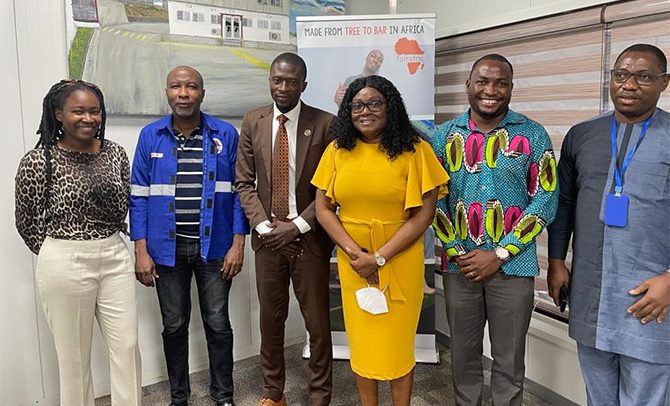 GHANA’S AMBASSADOR to Germany, Gina Ama Blay, on Wednesday paid a visit to Fairafric Ghana Limited, producers of Fairafric brand of organic chocolate at Amanase, near Suhum on the Accra-Kumasi Highway in the Eastern region.

The company has joined the league of cocoa processing factories in the country, producing different flavours in world class chocolate.

The cocoa processing firm, established under the German-Africa Compact with Africa, produces different brands of chocolate from organic cocoa.

The G20 Compact with Africa (CWA) was initiated under the German G20 Presidency to promote private investment in Africa and chocolate production using Ghana’s premium cocoa.

The factory, birthed last year in the midst of the pandemic, is up and running, producing about 10,000 bars of chocolate in an hour when demand is high.

About 90 percent of the products are shipped to European markets especially Germany, Switzerland and France, competing with similar brands from Europe.

The Ghana made chocolate is uniquely designed with carefully selected premium organic cocoa beans from company’s operational area within the Suhum axis.

The company operates under the Free Zones enclave, sourcing raw materials from the local community and creating employment for the local people. 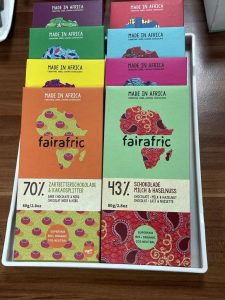 Ambassador Blay’s visit was to access how far the factory, whose construction started in March last year, during the lockdown, is progressing, and how best it can produce chocolate products in large quantities for export.

Received by the company’s management team led by Michael Halm, Ambassador Blay was highly impressed with the level of efficiency at the factory, and promised to extend the needed support to the factory.

The management expressed their happiness for the contribution of Ghana’s envoy to Germany for the successful take-off of the factory, constructed within five months from March.

The factory’s vision was born through the efforts of Mr. Hendrik Reimers when he met with President Nana Akufo-Addo at the last G20 summit in Berlin.

With the boost in demand, Fairafric Ghana Limited, currently producing several thousand chocolate bars per day, is expected to leap to 4 million bars per month in the months ahead, at full capacity.

Thus far, several German companies such as VW and Fairafric have started production and assembling respectively in Ghana under the G20 compact with others such as Brewtec getting ready to establish their presence in the country.

Ambassador Blay, commenting on the development, said she was pleased with the level of collaboration between German companies and their counterparts in Ghana. She stated similar collaborations are ongoing in education, technology energy and railways.

NDC MPs Walk Out On Deputies