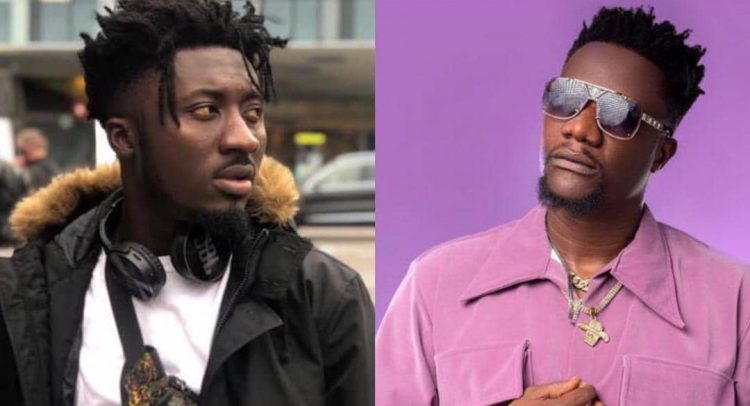 Rappers Amerado and Obibini have both released diss songs on Tuesday targeting each other in a bid to prove which of them is a better rapper.

Their fight started when Amerado allegedly jabbed Obibini in his freestyle verse on Tim Westwood show over the weekend.

That warranted a response from Obibini who said that the Kumerican rapper “has not reached”. But Amerado went on to dare him to reply in the studio if he claims he is a better rapper.

Obibini took the bait and released a freestyle song titled, Deceased on Tuesday evening at about 8pm.

He threw punches at Amerado and even tagged him as “silly gay” boy. However he went on to rap that if he gets Amerado’s girlfriend he will not spare her.

He also shred into Obibini’ with some heavy punchlines. He made fun of Obibini’s relationship with NAM1 indicating he is stacked with him (NAM1).

According to Amerado, Obibini is not growing as an act and questioned when was the last time he played a show.

The two have since Tuesday night been trending on social media as music fans are divided over which of them is the best of the two.

Below are what some of the fans are saying on Twitter:

I’m for Amerado
He really lash Obibini well well
He says Obibini was in class 1, moved to class 2, went back to class 1 again and has been there since since
Meaning Obibini has been an underground artiste even before Ronaldo joined Man U

THIS IS THE LINE THAT TRIGGERED THE BEEF BETWEEN AMERADO AND OBIBINI…..LET'S GO🔥🔥🔥 pic.twitter.com/6TWccnZBnX

The beef dier as it stands be like Obibini is winning.. Amerado gave a normal vibe.. nothing extraordinary