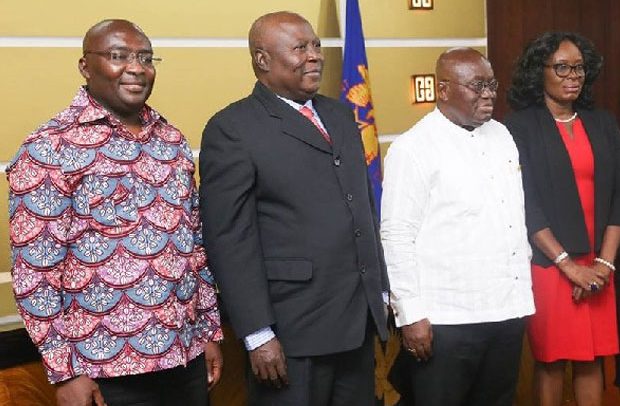 Flashback: The Special Prosecutor (second left) with President Nana Akufo-Addo (second right), Vice President Dr Bawumia (left) and Minister of Justice and Attorney, Gloria Akuffo (right) in a pose after he was sworn into office

The Special Prosecutor, Martin Amidu, has cited in his resignation letter about how President Nana Akufo-Addo interfered with his Investigation into the controversial Agyapa Royalties deal.

Mr Amidu wrote a lengthy letter to the President on Monday, November 16, 2020, announcing his resignation.

In the letter available to DGN Online, Mr Amidu recounted how the President ordered the Chief of Staff to deliver an urgent message to him (Mr Amidu) on the controversial deal.

He wrote “after receiving my letter under reference on 19th October 2020, you ordered your chief of staff on 20th October 2020 to deliver an urgent message personally to me the same day.”

“When she (Chief of Staff) could not reach me on telephone she decided to invite me in writing in her letter with reference number OP/COS/015 dated 20th October 2020 stating that: “I have been directed by H.E. the President of the Republic to deliver an urgent message personally to you, today 20th October 2020. I am looking forward to seeing you as requested.”

He added that “I received the Chief of Staff’s letter the next morning 21st October 2020 and reported to her Office as requested. The message she delivered to me was that you had instructed that I was not to do anything about my report on the Agyapa Royalties Transaction until I had met you on Friday 23rd October 2020. You were in the Volta Region when I met the Chief of Staff.”

I and My Deputy Have Never Been Paid - Amidu Reveals