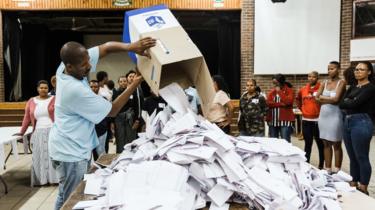 South Africa’s African National Congress (ANC) has been returned to office after winning parliamentary election, but with a reduced majority.

The ANC secured 58% of the vote, ahead of the Democratic Alliance (DA) on 21%. The radical Economic Freedom Fighters (EFF), came third with 11%.

Anger over the economy and corruption may have eroded its appeal.

How South Africa has changed since apartheid – in charts BBC

Turnout was about 65% in the twin parliamentary and provincial elections – a drop compared to the 73% registered five years ago.

Some six million young people did not register to vote.

Mothers Are Strong Foundations In Development Of Society – Dr. Bawumia