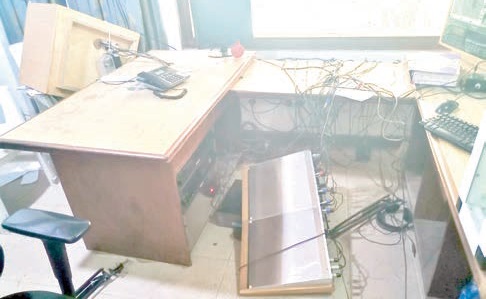 Radio Ada, a community radio station in the Greater Accra Region, has been vandalised by some unknown armed thugs.

The management of the radio station said the incident occurred on Thursday, January 13, 2021, at about 11:30 am.

“The attackers, one of whom was armed with a pistol, invaded the on-air studio by forcibly destroying its door open. They beat up the presenter and vandalised the on-air studio equipment, leading to the temporary shut-down of Radio Ada,” the management said in a statement.

According to the management, the attackers threatened to inflict further havoc should the station continue with programmes on the Songor.

“The attackers openly declared that they had come to vandalise the station because of its Manor Munyu and other programmes discussing the recent developments in the Songor,” the management said.

The management added that the matter has been reported to the Big Ada Police who came to take inventory of the damaged equipment.

The presenter who was beaten up has since been sent to the Ada East District Hospital for treatment.

The management revealed that the station will shut down for a few days to enable it to review and repair the extent of the damage caused.

“Our listening community may be assured that Radio Ada will thereafter continue to broadcast and that its commitment to inform and to give voice to the Dangme community, particularly those least voiced, remains unchanged,” it said.