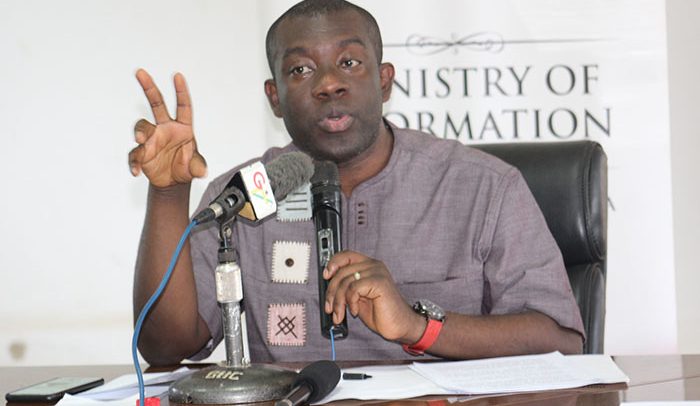 The Minister of Information, Kojo Oppong Nkrumah, has called on the Bank of Ghana to take swift action on persons who are advertising on some television stations that they have the ability to double money for their clients.

He has suggested to the central bank to state its position on the issue before matters come to a heat.

The minister was answering questions during the Upper East Regional Town Hall Meeting in Bolgatanga.

The issue of people claiming to have powers to double money to make people rich overnight on television is becoming a growing concern and the regulatory authorities appear not to be acting to avert future financial crisis.

The minister admitted the situation was worrying and said the regulators both in the financial and media sectors should not allow it to grow.

He also called on the media and civil society organizations to intensify the campaign for a YES vote to pave way for the election of municipal, metropolitan and district chief executives (MMDCEs).

According to the Information Minister, a positive outcome after the December 17, 2019 National Referendum would be positive for the country’s democracy because it seeks to trigger the amendment of Article 55(3) of the 1992 Constitution of Ghana to pave way for the public to elect whoever becomes their MMDCEs this time around.

“President Akufo-Addo promised that he would ensure a shift from the current system of appointing MMDCEs which some people say makes a President too powerful and prevents MMDCEs from being directly accountable to the people in the districts, municipality and metropolis,” he said.

“In fulfillment of this, the administration has completed all its consultations and preparatory works. The referendum is expected to come off on 17th December 2019 alongside the District Assembly elections. To secure a YES vote, there will need to be a 40 per cent turnout at least out of which 75 per cent of the votes must be YES,” he added.