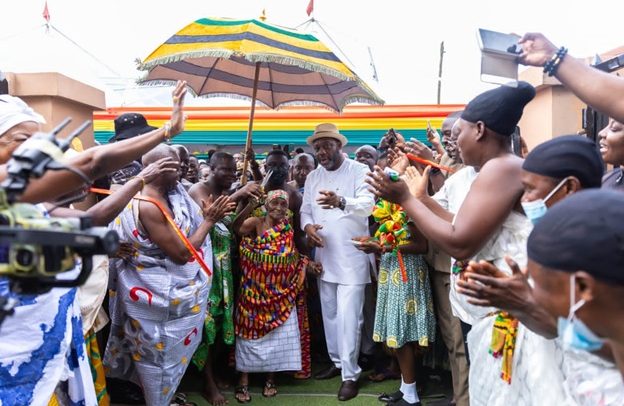 AN ULTRAMODERN library, named after the late Asante Queen, Nana Afia Kobi Serwaa Ampem II, has been commissioned in Kumasi, amid pomp and pageantry.

Situated at Ashtown in the Manhyia South Constituency in Kumasi, the 200-seater edifice boasts of a free Wifi, 36 computers and other amenities to promote easy learning.

The one-storey library project is also stocked with a staggering 10,000 books for its patrons, especially students, to study and acquire new knowledge.

The Member of Parliament (MP) for Manhyia South, Dr. Matthew Opoku Prempeh aka ‘Napo’, constructed the library to posthumously honour the deceased queen.

According to him, he decided to name the library after the Asantehemaa to honour her for her good works for the country and also motivate others to emulate her example.

Napo, who is a former Education Minister, entreated the youth of Manhyia South and Kumasi in general to constantly visit the library and add to their knowledge.

The Manhyia South lawmaker noted that it is only through education that the gap between the rich and the poor in society could be narrowed, so the youth should take note.

Napo lauded the Asantehene, Otumfuo Osei Tutu II, for providing the land for the construction of the library to posthumously honour his (Otumfuo’s) deceased mother.

Other dignitaries present were Ing Nana Poku Agyeman, the K

Hayford Siaw, the Executive Director, Ghana Library Authority (GLA), on his part, praised Napo for his contributions to the growth of education, especially the GLA.

“A total of 50 new library projects have been constructed nationwide during the last three years, and it was made possible following Napo’s works as education minister,” Mr. Siaw disclosed.

He said from 1950, when the GLA started their operations, only 61 libraries had been constructed before Napo was appointed as Education Minister to cause a positive change.

Ofosu Frimpong, the Ashanti Regional Director, Ghana Library Authority, said it was a step in the right direction for Napo to name the library after Nana Afia Kobi Serwaa Ampem II.