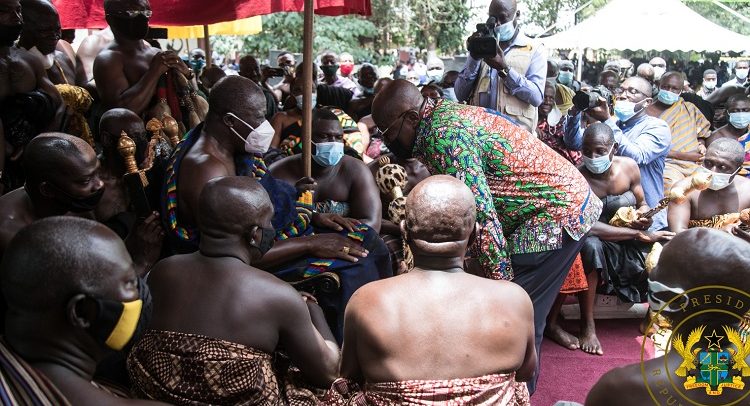 President Akufo-Addo greeting the Otumfuo at the Manhyia Palace yesterday

THE ASANTEHENE, Otumfuo Osei Tutu II, has given thumbs up to President Nana Addo Dankwa Akufo-Addo for delivering excellent leadership in less than four years in office.

The Asante Monarch has, therefore, declared that the President’s splendid works will surely manifest when Ghanaians cast their ballots to elect their leader during the upcoming December 7 elections.

“Your good works will lead you,” Otumfuo said to President Akufo-Addo at a mammoth durbar of Asanteman Traditional Council held at Nana Afia Kobi Serwaa Ampem Gardens at the Manhyia Palace in Kumasi.

President Akufo-Addo, accompanied by some of his government officials and New Patriotic Party (NPP) leaders, was at the palace yesterday seemingly to seek the support and blessings of Otumfuo and the Asanteman Traditional Council as he started his campaign in the NPP stronghold of the Ashanti Region.

According to Otumfuo, he advised President Akufo-Addo during the early stages of his tenure to sacrifice and provide positive leadership to transform the country and make a good name for himself in return.

“You listened to my advice and that is why today you have the confidence to stand before me and ask for my support to win the next elections,” he said, adding that the government was on the right track.

Besides, Otumfuo said Asanteman and its people are loyal; therefore, they would reward any government, the New Patriotic Party (NPP) government included, that would work to transform Asanteman.

“Asanteman will reward you based on your works,” he pointed out and added that the people of Asanteman are noted for always rewarding loyalty and good works and “this trait of Asanteman will be on display on December 7.”

The Asantehene said he was highly impressed by the loyalty and respect that President Akufo-Addo had displayed to the Golden Stool, in particular Otumfuo, since he became President in 2017.

“You have not forgotten about the Manhyia Palace as you have always visited this place anytime that you visit the Ashanti Region and I am highly impressed with that positive attitude you have shown,” he added.

The Asantehene also praised President Akufo-Addo for always consulting him for advice on key national issues and pointed out that the President had impressed him in the past four years.

He recounted that the Golden Stool, which is the soul of Asanteman, helped the then Candidate Akufo-Addo to emerge victorious in the 2016 presidential polls “and after that you came to thank me.”

Otumfuo, however, admonished President Akufo-Addo and his NPP to campaign on their achievements in the past four years so that their hankering to retain political power on December 7 would become a reality.

“I will advise you and your political party to campaign and explain the policies and programmes that you think you have introduced in the past four years to advance this country so far,” he admonished.

Otumfuo said traditional leaders are forbidden from engaging in partisan politics, but he was quick to state that “but chiefs vote during elections and we shall also vote based on how you have performed.”

I Can’t Lie For Votes - President