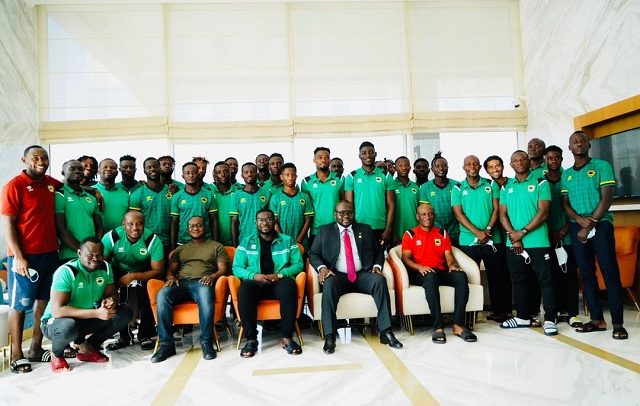 Asenso-Boakye (in tie) with officials and players of Kotoko

Asante Kotoko has received a fabulous visit in Dubai from the Minister of Works and Housing, Francis Asenso-Boakye  yesterday.

The Porcupines are in the United Arab Emirates’ luxurious city for the third phase of preseason as Coach Prosper Narteh finalises his plans for the upcoming 2021/22 season.

Mr. Asenso-Boakye, who is also in the Eastern Asian country, took time off to visit the squad at the S-Hotel in Al Barsha to fraternize with the players.

The Member of Parliament for Bantama and staunch fan of the club, urged the players to give their best on the field, reminding them that they have behind them several great personalities and a history to defend.

“There are a lot of greats associated with Kotoko and so when you are playing, you ought to know that you have a lot of important people supporting you, you have all these achievements that the club has chalked over the years behind you; the President (Nana Akufo-Addo) is behind you, Club Owner (Asantehene Otumfuo Osei Tutu II) is behind you and you have your ever-innovative hardworking CEO (Nana Yaw Amponsah) behind you, and so that should motivate you,” he charged.

He continued: “Secondly, you are also playing for your future. We have seen people play very well and leave for big clubs.

“You have no idea the potential, the good thing also is that you have a good management team that is ready to support you.”

Mr. Asenso-Boakye expressed high hopes in Coach Narteh who, he said, has the quality to push the team forward.

“I didn’t know the coach but I have read a lot about him since he came, and with the demeanour he has shown, I have no doubt at all that he can take you to greater heights,” he added.

The Porcupines play their first preseason game today against Al Hilal United after which two more games are lined up before the tour ends on August 21, 2021.

Nana Yaw Amponsah also urged the players to take their time at the club serious.

“When you are here and you have the opportunity to play at the Baba Yara Stadium; a 40,000 capacity, and you have eight million people backing you and you don’t take it seriously, then I don’t know what else you would take seriously.

“Cherish your time here. Some of you may not realise how good this time is for you until you leave here. Do not let us beg you to put in your best. It is your career and your responsibility to represent Kotoko out of the 30 million people in Ghana.”