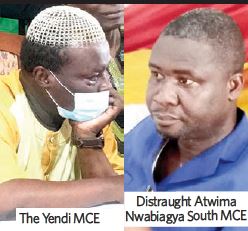 As a result, Michael Amoah Awuku of Atwima Nwabiagya South and Ahmed Yussuf Abubakar of Yendi have 10 days to be re-confirmed or fall out completely from the race.

There have been a bad blood between some NPP members including assembly members and the MCE in Atwima Nwabiagya for over a year after the MCE allegedly got the police to crush a protest march the aggrieved supporters staged to get him out of office.

The assembly members of Atwima Nwabiagya South Municipality recently insisted that the re-nomination of Mr. Amoah Awuku is not in the interest of the municipality, claiming that he has nothing new to offer the area.

Following the re-nomination of the MCE to continue his work, the aggrieved assembly members had said they were prepared to accept and overwhelmingly endorse any other person but the current MCE.

They claimed they are not supporting him because the MCE showed signs of vindictiveness, disrespect to the chiefs, and also fails to consult them despite the critical roles they play in the democratic structure of the locality.

“We are committed to the pact we have with President Akufo-Addo but the anchor of that pact in this area will lead us nowhere, reason we have rejected him to send a signal to the President that Amoah Awuku is not a unifier and will not help his course,” the assembly members said after voting to reject the nominee on Friday, September 24.

In the heat of the voting process, some aggrieved assembly members suspected that there were underhand dealings allegedly to favour the MCE and, therefore, said they were vigilant.

After the disputed polls, which was held at the Municipal Assembly Conference Hall, the Municipal Chief Executive nominee Mr. Amoah Awuku polled 19 votes out of 31 eligible assembly members despite plea from some key regional party executives to give him the nod.

Assembly members stood their ground and maintained that either a new person is chosen or they will continue to reject him since he has proven to be incompetent in the handling of affairs the municipality.

The nominee needed two-thirds of the assembly members which translates into some 21 votes to be approved, but fell short of two votes.

It would be recalled that, before the list of those nominated for the positions of MMDCEs, some chiefs and people in the municipality had persistently urged President Akufo-Addo not to reappoint Mr. Amoah Awuku, citing instances including his disrespect to traditional authorities and failure to consult them as development partners.

Series of demonstration and press conferences were organised by the chiefs and the people to appeal to President Akufo-Addo to remove the MCE from office but it never worked.

The MCE has variously said he did nothing wrong and said he was determined to accelerate the development of the municipality.

In Yendi, 21 assembly members voted YES representing 51% while 20 of them voted NO representing 48% to reject the nominee who was supposed to secure 28 votes out of the 41 votes cast to guarantee his confirmation.

The Director of Election in the Northern Region, Lucas Yiryil, after the voting indicated that the nominee Ahmed Yussuf Abubakar failed to get majority votes and said the nominee qualifies for a second opportunity within 10 days.

Policeman Frees Female Suspect After Sex With Her In Cells