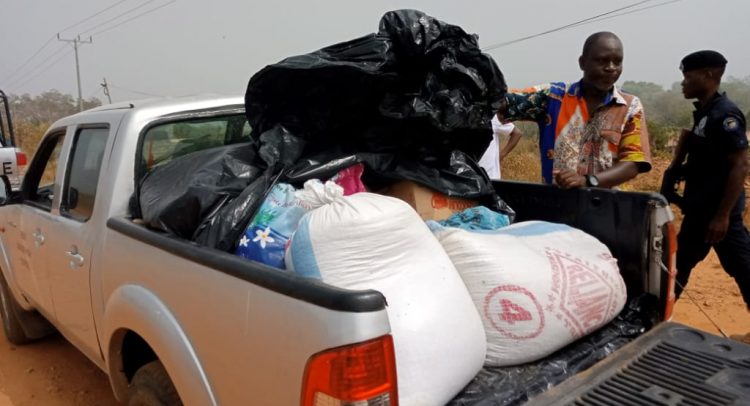 Some of the items intercepted by the police

AN INTERNAL auditor of the Ghana Education Service (GES) and four officials of the Peki Senior High School in the South Dayi District, who were recently arrested in connection with an alleged diversion of food items from the school to the auditor’s house, have been granted bail after being detained.

The driver was arrested on Friday, January 10, 2020, after the food items which he was asked to deliver in the school’s pickup was intercepted.

The internal auditor and the school’s bursar turned themselves in that same evening while the chief driver and matron were arrested on Monday.

The five suspects have been granted bail and are to be reporting to the Police to assist with investigations.

Public Relations Officer of the Volta Regional Police Command, Corporal Prince Dogbatse, who confirmed the development, said the headmaster was yet to be interrogated as he was out of town on the day of the incident. Be that as it may, he and the store keeper have also been invited by the police.

He added that the case would surely go to court after adequate evidence had been adduced from the investigations.

The five suspects had been detained over allegations that they, together with the school’s headmaster filled the school’s Ford pickup truck with registration number, GR-9402-Z with food items destined for the house of the auditor in Ho, the Regional capital.

The items which are estimated to cost thousands of Ghana cedis and can feed about 200 students for a whole week include, bags of rice, bags of maize, cartons of milk, cartons of tomato paste, two 2.5 litre gallons of oil, school’s branded stationery among others.

The items were intercepted by the Deputy Regional Minister, Johnson Avuletey together with some task force at Sokode-Lokoe near Ho. They followed the driver to the house of the auditor at Dome in Ho, reloaded the items onto the truck and handed it over to the police.

The deputy minister who said he was acting on the information provided by informants said, the bust confirmed rumours and complaints about diversion of resources meant for students to placate private interests.

He therefore warned the school heads in the region to desist from such acts because when they are caught, the law will deal with them. He said, “It is a warning; this is just the beginning. If they venture, they will regret. They are there to push the interest of the government. All that Akufo-Addo is doing now, it is for the betterment of this country, so I see no reason why a group of people will come together to sabotage the president. I am giving them a warning; they should sit up otherwise this region will be on fire.”

He also encouraged teachers and other staff of the various schools to continue to feed the authorities with information of persons sabotaging the system adding that they will be well protected and rewarded.

TUC Gives Thumbs Up To Govt For Railways