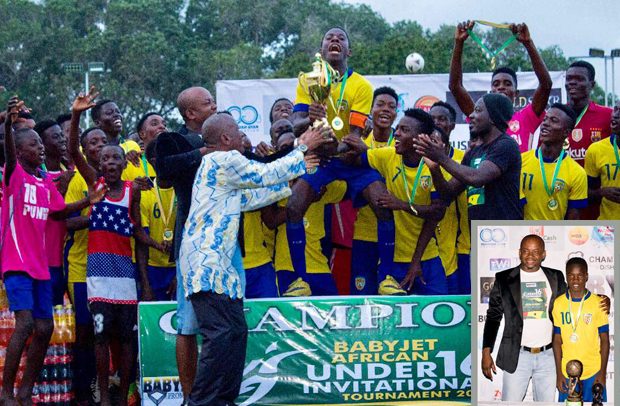 Officials of the maiden Baby Jet Promotions U-16 soccer tournament left the Accra Academy Astro Turf satisfied; after meeting their target.
The eight-day international tourney aimed at giving juvenile soccer players a platform to display their talents, drew 16 teams from the sub-region.
Indeed, the competition unveiled great talents; and produced champions in the Dansoman-based Great Somas SA who triumphed 2-1 over Cedars Stars Academy (Inter Allies Academy) in the final game.
Gifted midfielder, Mathew Cudjoe endeared himself to the crowd with his deft touches which handed him the most valuable player and top scorer (six goals) prizes of the tournament.
It was Bolga Soccer Masters who picked the third placed prize, while Abdul Manaf and Attram de Visser emerged as the best goalkeepers.
Tournament Organizer, Sammy Anim Addo in a post tourney interview said “It’s been great display of soccer talent; l must confess we have achieved our target of giving our future stars the platform to demonstrate their talent. There were some scouts around who have identified some players for future endeavours. This is how Asamoah Gyan started, so we thought it wise to give the younger folks same opportunity. He was monitoring the competition; and l can say he is happy.”
The Gold Star Consult powered tourney received support by way of sponsorship from Zylofon Cash, Twellium Foundation, Bush Kanteen, NAM Missions, Paradise Pac Mineral Water, Jet Link, Asamoah Gyan Foundation and Champion Dishes.