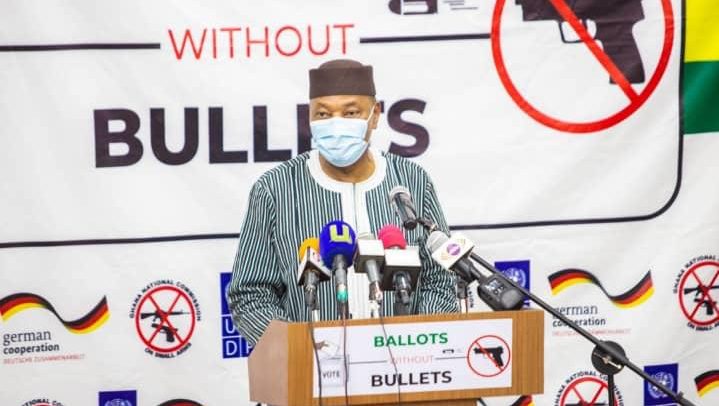 The Ghana National Commission on Small Arms and Light Weapons in collaboration with the United Nations Development Programme (UNDP) and with funding from the German Foreign Office has launched a campaign dubbed “Ballots without Bullets” to kick start an intensive public education and sensitization activities to influence citizens to uphold peace ahead of Ghana’s elections on 7th December, 2020. 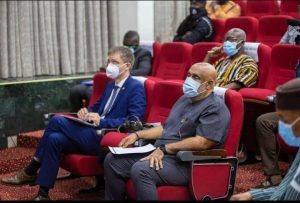 The UN Special Representative of the Secretary General to West Africa and the Sahel, Dr. Mohammed Ibn Chambas, who was the Guest Speaker at the launch, mentioned that Ghana has often been described as the beacon of democracy in Africa because of the country’s seven successive elections since 1992, and 2020 will birth the eighth election. 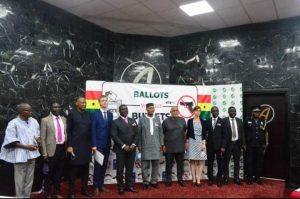 He recognized that, although significant progress has been made, there are still some level of tensions and pocket of violence in the country which calls for needed attention, hence the importance of the “Ballots without Bullets” campaign.

“It is noteworthy that this flagship advocacy and public sensitization programme “Ballots without Bullets” has come at the right time to call on all of us to work at maintaining peace before, during and after the elections in Ghana”, H.E Ibn Chambas noted.

According to the Executive Secretary of the Commission on Small Arms and Light Weapons, Jones Applerh, current statistics from the Ghana Police Service identified about 4,098 hotspots across the country ahead of the 2020 general elections. Out of the 16 regions, the top five (5) regions with the highest hotspots include Ashanti with 635 flashpoints, 537 in Central, 405 in Eastern, and 323 and 321 respectively in Western, and Volta.
He further noted that, with these identified regional hotspots which are highly susceptible to violence and security breaches, the Commission in collaboration with state security agencies, the National Commission on Civic Education and the National Peace Council is rolling out sensitization and education programs in at least ten (10) districts or constituencies which are classified as ‘Hottest-Hotspots’ across the country. He appealed to all to be tolerant.

“I call on everyone to uphold unique values of brotherliness, tolerance & co-exist peacefully in Ghana”.

The United Nations Resident Coordinator for Ghana, Charles Abani called for continuous commitment to maintain peace in Ghana. He noted that, Ghana can only achieve the Sustainable Development Goals within a peaceful environment.

He added that: “the UN in Ghana is proud of its partnership especially with key institutions to uphold and maintain peace in Ghana”.

Ms. Silke Hollander, Deputy Resident Representative at UNDP emphasized the need for everyone to ensure a peaceful election without resorting to violence or the use of guns. She stressed the need for society to enhance access to more opportunities for young people from all backgrounds to learn and earn a decent living in order to reduce unemployment which usually push them towards violence and terrorism.

“I call on young people to work together to create an unstoppable force to uphold peace. Be the generation to end electoral violence and bring your energy and enthusiasm onboard to make this campaign a success”, Ms. Hollander added.

The launch also witnessed remarks from Ambassador Baba Gana Wakil, the Resident ECOWAS Representative in Ghana; H.E Mr. Helge Sander, Chargé d’Affaires of the Embassy of Federal Republic of Germany to Ghana, Dr. Bossman Eric Asare, Deputy Chairman of the Electoral Commission, and Mr. George Amoh, the Executive Secretary of National Peace Council, who all emphasized the need for everyone to remain peaceful and promote peace ahead of Ghana’s 2020 elections.