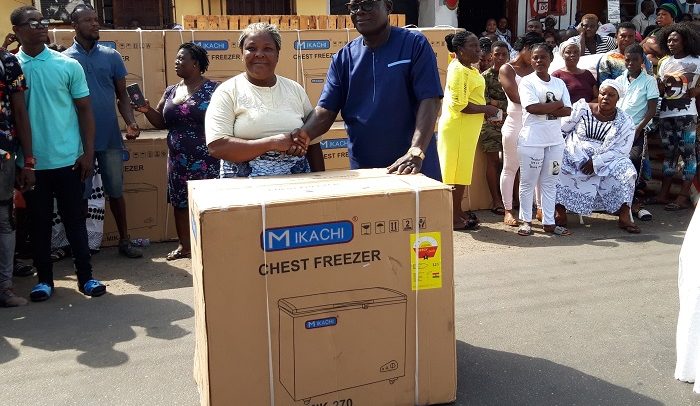 A scene during one of the presentations

The Parliamentary Candidate of the governing New Patriotic Party (NPP) in the Odododiodioo Constituency, Nii Lante Bannerman, has provided various forms of support to some traders and residents of his constituency, including cash donations as start-up capital for their businesses.

He made the donations last Friday when he launched his Bannerman Foundation aimed at providing support for the needs of the underprivileged in the Ghanaian society.

Some of the constituents were given deep freezers, hairdryers, bags of rice and maize. Seventy bags of 50kg rice and 140 bags of maize were donated to food vendors in the constituency. Besides, 13 deep freezers were presented to water and iced-cube sellers, whilst 46 sewing machines and 21 hairdryers were presented to dressmakers and hairdressers, including an amount of GH¢300 as start-up capital for 50 persons.

Beneficiaries of the items donated could not help thanking Nii Lante for the kind gesture since they considered it a life-changing opportunity.

Speaking at the colourful ceremony which was attended by the Metropolitan Chief Executive (MCE) of Accra, Nii Adjei Sowah; Chief Executive Officer (CEO) of the Coastal Development Authority (CoDA), Jerry Ahmed Shaib, and the Members of Parliament (MPs) for the Okaikoi North and Ablekuma Central constituencies, Issah Fuseini and Ebenezer Nartey respectively, Nii Lante Bannerman, who also doubles as Chairman of the National Premix Fuel Secretariat, assured his constituents that his foundation would continue to identify all major challenges facing them and help address them in the course of time.

Besides, he took the opportunity to introduce what has come to be known and accepted as the Jamestown Football Club comprising young and talented football players who are all indigenes of the Odododiodioo Constituency.  The foundation seeks to nurture the team to compete in the Ghanaian premier league.

Lii Lante received commendations for the kind gesture from many speakers at the event, including the MCE of Accra and the CEO of CoDA.

For them, that was a sign of a man committed to the welfare of his people and, therefore, stressed the need for them to crown his good deeds and efforts by voting for him come December 2020 when the nation goes to the polls to elect a president and parliamentarians.