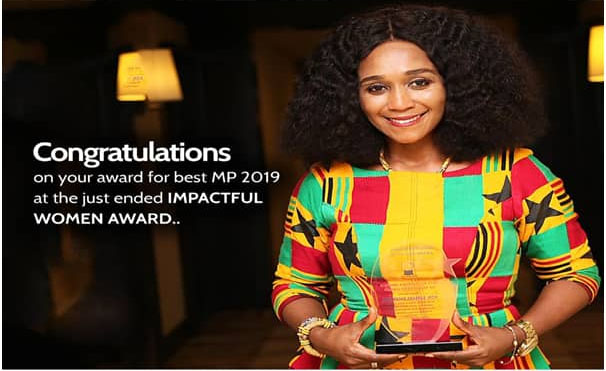 She was honoured with the Impactful Women Award at a ceremony themed: “Celebrating and honouring the efforts of female pacesetters.”

The Impactful Women Award honours and celebrates African Women for their contributions towards women empowerment in society.

After receiving the award, Ms. Ayisi who is also the Deputy Minister for Works and Housing, noted that it felt good to know that people were observing the performance of MPs.

“Most of the time when you are doing something, you may think nobody is watching but the world is watching, and I feel very motivated especially with regard to the things that I am doing for my constituents. With this recognition, I am motivated to do even more,” she said.

The Convenor of the Impactful Women Award, Barry Ndu, on his part, said a lot of women were contributing so much towards the development of society.

“However, they are not adequately recognized and rewarded as required. The Award, according to him, is aimed at honouring these women for their contribution to society.

Twenty-one other female personalities in Africa were also recognized for their outstanding successes in their various fields,” he said.

It will be recalled that Ms. Ayisi, on her election as the MP for Cape Coast in 2016, was subsequently appointed Deputy Minister for Education in Charge of Technical and Vocational Education Training (TVET).

She then rolled out several initiatives aimed at empowering women in her constituency and across the country.

Notable among them are the provision of interest-free loans to female traders, skills training for girls under the Opportunity International Program and the Cape Coast North Entrepreneurial Training Program for Out -of-School youths within Cape Coast.

The initiatives have empowered many women and girls making them economically independent.