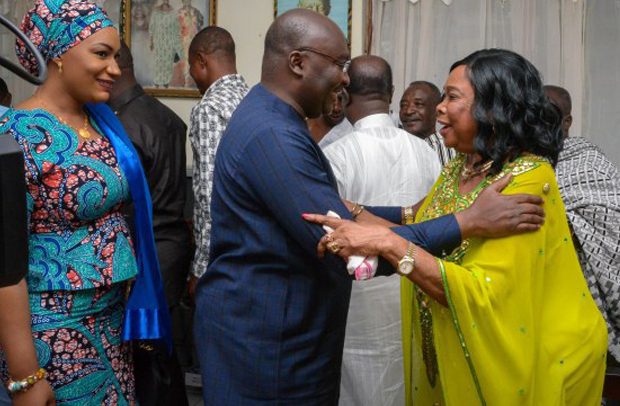 Vice President Dr. Mahamudu Bawumia and his wife, Hajia Samira Bawumia, were guests of Madam Amma Busia and the chiefs of Wenchi when the second couple joined in the celebration of the 40th anniversary of the death of Prime Minister Dr. K.A. Busia.

A big celebration had earlier been held at the Accra International Conference Centre (AICC), which expectedly attracted President Akufo-Addo, former President J.A. Kufuor, Speaker of Parliament Rt Hon Mike Oquaye, among others, on the long list of attendees.

The celebration moved to Wenchi, the deceased’s hometown, where the chiefs and people joined Madam Amma Busia, an elder of the New Patriotic Party (NPP), in hosting the important guests.

Dr. Busia left important legacies in the political history of Ghana; his rural development focus standing him apart from his predecessors.

The academic and politician was noted for his anti-corruption crusade even in those early days when the cankerworm had not become as endemic as it has in latter days.

An elated Madam Busia has extended gratitude to the countless sympathisers who supported both in Accra and Wenchi to commemorate the 40th anniversary of the transition of her brother.