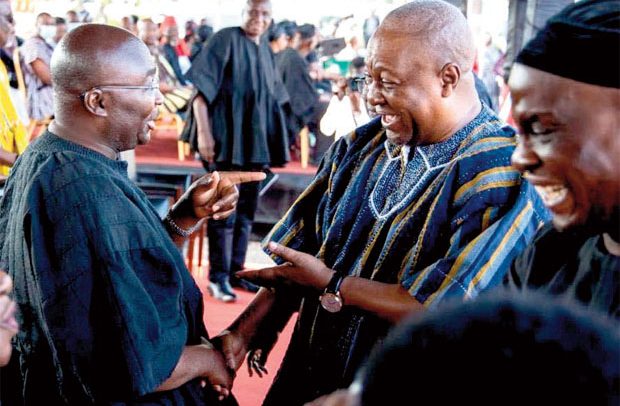 VICE PRESIDENT Dr. Mahamudu Bawumia has responded strongly to critics who have accused him of abandoning matters on the economy and focusing on digitisation, asserting that the economy is not transformed with brick and mortar.

On the contrary, he said the nation can transform the economy with ideas, systems and institutions, “and not just brick and mortar.”

According to him, there are still many who refuse to understand the importance of digitisation for economic transformation, and therefore mock any new innovation in that direction.

Some elements of the opposition National Democratic Congress (NDC), in recent times, have accused him of running away from talking on economic issues of the country but rather pontificating the digitisation agenda of the New Patriotic Party (NPP) administration.

Speaking at the launch of the National Electronic Pharmacy Platform at the Alisa Hotel in Accra yesterday, the Vice President indicated that such people, who have little understanding on digitisation, have unfortunately chosen to mock the digital property address system.

“Today, with mobile money interoperability, 90% of adult Ghanaians, at least, have either a mobile money account or a bank account and the two are interoperable, and basically working like the same,” he asserted.

Dr. Bawumia said the government had practically achieved the objective, despite the doubters’ disbelief in the digitalisation, which has resulted in mobile money interoperability.

He continued, “People did not realise that through the Ghana Card, we have been able to increase the proportion of Ghanaians with tax identification numbers from 4% when we came into office to 85% today.”

“People could not understand how the Ghana Card, certified by CAIO, could be used as a travelling document and they mocked the idea.

“But today, it is a reality. Our diasporans should get the Ghana Card before they leave Ghana and when they get Ghana Card, they can travel to Ghana without applying for a visa at any embassy abroad,” he stated.

He said Ghana was the first and only country in Africa to have a universal QR code payment system, and added that “those people did not believe it when the government launched the GhanaPay.”

“But now in Ghana, we have a bank-wide mobile money wallet called the GhanaPay,” he stated.

He again said, “People could not understand how drone services could be used to deliver medical supplies and save lives. They tried to convince people that drones were to be used for taking pictures of women in the bathrooms.

“They did not believe it, but today, as we speak, Ghana has become the largest medical drone delivery service in the world,” he posited.

The Vice President said unfortunately, while people in government are trying to move the country to a different level, they are confronted with the “mindset that only sees impossibility; a mindset that refuses to believe African countries like Ghana can lead the world in the implementation of digital technologies.”

“This is why I enjoy proving the skeptics wrong all the time. Usually, when I say we are going to do this, they will say he is lying, and later on when it comes they keep quiet,” he intimated.