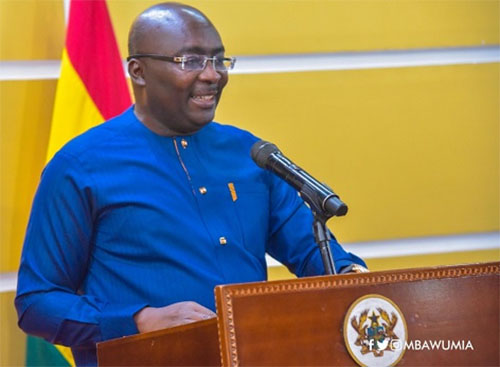 As a paragon of economic management, Vice-President Dr. Mahamudu Bawumia has been acknowledged by the opposition National Democratic Congress (NDC) with a large dose of finesse.

NDC members want someone who can match Dr. Bawumia, for which reason they are still searching.

It is elating that the party has subtly rated the Vice-President high although such an acknowledgment would never be made publicly due to partisanship. Recognition of persons outside their party is not part of the DNA of NDC members.

For a party which thinks more about elections than the development of the country, any public acknowledgment of the comparative advantage the ruling party has over them in terms of governance and economics acumen by any of their members would be regarded as a political sacrilege, with the sanction thereof being a possible outright excommunication.

Allotey Jacobs was lavish with such acknowledgments and, therefore, earned the ire of the party leadership.

Still brooding over who to choose as the running mate for their flag bearer, John Dramani Mahama, one thing which stands as a constant is the fact that whoever is chosen should be a match for the economics wizard of the New Patriotic Party (NPP), Dr. Mahamudu Bawumia.

Therefore, the vacillation or delay in settling on a running mate in the NDC lies in the difficulty in finding somebody who can call the bluff of the Vice-President, a man whose mastery over fiscal affairs accounts for the reversal of the economic mess the NDC bequeathed to the Akufo-Addo government. It has been a long and tortuous march since the dirty books were handed over to the Economic Management Team whose cleanup has been internationally acclaimed.

It can, therefore, be concluded without any shred of doubt that Dr. Bawumia is a gold standard or benchmark with which the NDC is using to pick its running mate. We can only wish the party Godspeed in this ‘seeking a needle in a haysack’ endeavour.

We acknowledge the recognition accorded the Vice-President and would have rather it was done publicly. That is only a wish which is, of course, far from being granted.

The Bawumia benchmark stems from, among others, Alex Mould’s bluff that he would be a match for Dr. Bawumia should he be picked as John Mahama’s running mate.

Alex Mould could not have put it better than “I can match Bawumia if I am chosen as Mahama’s running mate.”

The former Ghana National Petroleum Corporation (GNPC) boss has by the foregone done two things: announced his readiness for the post of running mate to the flag bearer and has acknowledged Dr. Bawumia’s prowess in economics.

We empathize with the NDC members over their predicament as they continue to grope for a running mate. It is not easy when the choice is a personality who can call the bluff of Dr. Bawumia.

When they finally settle on such a personality, let us play good politics devoid of calumny and all the negative attributes about their party.

Wendy Williams Takes A Break From TV Over Disease