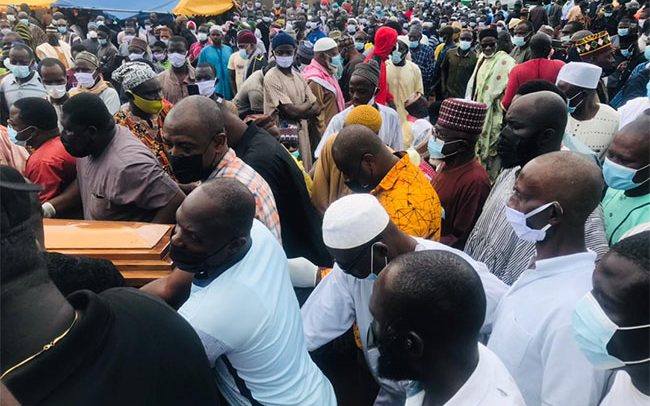 The mother of the Vice President, Dr Mahamud Bawumia, Hajia Mariama Bawumia has been laid to rest at Walewale in the North East region.

Hajia Mariama passed away peacefully on September 13,2021 in Accra.

The late Hajia Mariama Bawumia was born on September 15,1939 and died at the age of 82 years.

She has been buried at the same spot with her husband the late Mumuni Bawumia.

Vice President , Dr. Mahamudu Bawumia, was accompanied by elders of the family to pay his last respect to his mother before her mortal remains was laid to rest at the family house.

Alhaji Sulemana Sapaga, a brother of the late Hajia Mariama Bawumia said the death of their beloved sister was a shock to the entire family.

According to him, the late Hajia Mariama was instrumental in the education of almost all the family members.

“ She helped us a lot in our education and impacted a lot of lives in the family so it’s really sad and painful to lose such a personality who is patient and accommodating.”

The National Chairman of the NPP, Freddie Blay, National Secretary, John Boadu, National Organizer, Sammy Awuku , former Northern Regional Minister, Salifu Saeed and other bigwigs of the NPP are at the burial grounds in Walewale.