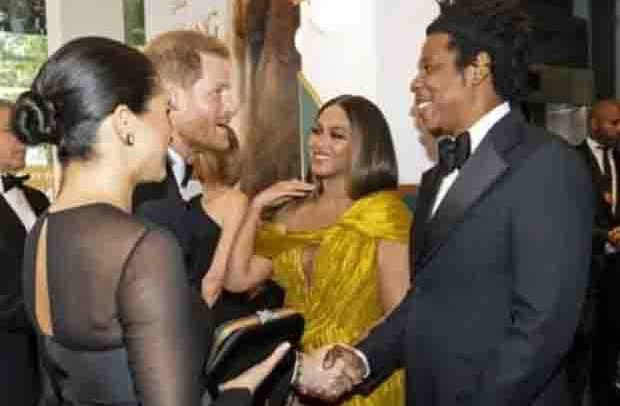 Internationally acclaimed US singer, Beyoncé, has hailed the wife of Prince Harry, Meghan Markle, for boldly speaking out on happenings within the British Royal Family.

There have been lots of things said around the world following Oprah Winfrey’s prime-time interview with Markle and Prince Harry.

The interview was premiered on Sunday night, March 7, 2021 on CBS, with the ensuing public backlash forcing the British Royal Family to respond to claims made by Markle.

And in a statement released Tuesday night, March 9, 2021, on her official website,  Beyoncé endorsed the Duchess of Sussex boldness to speak out.

Beyoncé aka Queen Bey, in her statement, noted that “Thank you Meghan for your courage and leadership.”

She shared a photo of herself, her husband, Jay Z, Meghan and Prince Harry, first ever meeting at the London premiere of The Lion King in the summer of 2019.

Queen Bey told Meghan that “We are all strengthened and inspired by you.”

During the interview, Prince Harry and Meghan disclosed additional information  on why they left their royal posts.

Among the allegations made were that Meghan was turned away after she appealed to the Buckingham Palace for support due to suicidal thoughts.

Also, an unarmed member of the Royal Family is said to have expressed concern to Prince Harry about the skin color of Archie, the Duke and Duchess of Sussex’s first son.

The Buckingham Palace had stated that it was taking seriously the issues of race  raised by Prince Harry and his mixed race wife, Meghan Markle.

In a statement, the British Royal Family observed that the issues raised by the Duke and Duchess of Sussex are “concerning”.

However, it stated that the family will deal with those issues privately.

In its statement, the Palace added that the “recollections may vary.”

But the Royal Family stated that the claims made by Prince Harry and Meghan in their recent interview with US television personality, Oprah Winfrey, were “taken very seriously”.

It would be recalled that in the “tell it all” interview, Meghan informed Oprah Winfrey that Prince Harry had been asked by an unnamed family member “how dark” their son Archie’s skin might be.

But the Palace assured that the Sussexes would “always be much loved family members”.

Meghan Markle is the first mixed-race member of the modern Royal Family.

According to the statement, “The whole family is saddened to learn the full extent of how challenging the last few years have been for Harry and Meghan.

“The issues raised, particularly that of race, are concerning. Whilst some recollections may vary, they are taken very seriously and will be addressed by the family privately.”

Meanwhile, reports say the Palace responded after crisis meetings involving senior royals in the wake of the interview.

During the interview, Prince Harry and Meghan spoke about racism, mental health, the media and other members of the Royal Family.