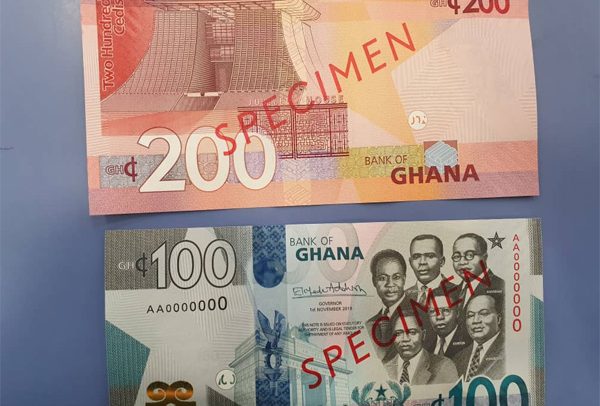 Why The New Notes?

The Governor of Bank of Ghana, Dr. Ernest Addison, unveiled the notes and coin, giving detailed reasons for their introduction.

According to the Central Bank, high levels of inflation currency depreciation in the past have eroded some of the gains from redenomination.

It said the deadweight burden ‒ reflected in high transaction cost ‒ has re-emerged and added that the set of higher denominations is expected to address the increased transaction cost, especially in high-valued transactions in a cash-based economy like Ghana.

The BoG added that the structure of the banknotes denomination has changed, resulting in a shift in demand for higher denominations (GH¢50 and GH¢ 20 account for about 70% of the total demand), reflecting the expansion in income and prices.

“The introduction of the higher value denominations in circulation are therefore necessary to ensure customer convenience, reduction in the costs of printing and other currency management processes,” the BoG stated.

According to the BoG, ensuring customer convenience, reducing high transaction cost, efficiency in high-value transactions in cash, reduction of cost of printing, as well as currency management, including processing, transporting and storing banknotes, are some of the benefits that come with the introduction of the new notes.

The BoG indicated that the introduction of the new notes would not lead to higher inflation, and said the higher denomination was introduced to only ease high transaction volumes.

“These notes will only replace some of the large cash transactions done with the existing GH¢50 and GH¢20 banknotes,” it explained, adding that “again, the value of currency depends on what you buy with it, rather than what the face value is.”

According to the Central Bank, the GH¢100 would complement the existing high denomination banknotes to ease high value transaction, but the GH¢200 banknote would be introduced gradually into circulation and would be in limited quantities.

The BoG said it intends to gradually replace its lower banknotes denominations with coins to reduce its costs of printing.

It also said it would also embark on a vigorous campaign among road transport workers, market operators, small businesses, supermarkets, vendors and others to create avenues for the usage of the coins, including developing infrastructure for coin usage.

“There will be a nationwide educational campaign focused on the security features, proper handling of banknotes and promote usage of coins,” the BoG stated.