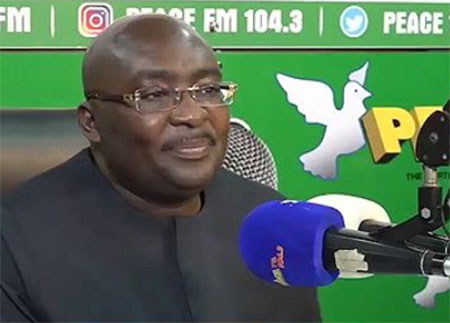 One of the attributes of good leadership is boldness and the ability to take decisions which are public interest-centred regardless of whose ox is gored.

Intentions driven by populist tendencies are hinged upon insincerity and mendacity, drivers of which do not see beyond elections.

Vice-President Mahamudu Bawumia reflected the boldness attribute of his government when in the face of the high-decibel cacophony about Okadas propelled by former President John Mahama he announced government’s alternative breadwinning arrangement for the motorbike riders. This is suggestive of the fact that legalising what has already been outlawed would not be considered under any circumstance—period.

A good government which has the interest of the people at heart acts decisively and unambiguously as it cruises on a genuine and sincere course. Those merely seeking votes from the gullible and could not care a hoot about the negative repercussions of promises think and act differently.

Government has not vacillated in the face of a crossroads decision as to whether or not to legalise what by all standards is a parlous occupation which continues to be the source of avoidable deaths and amputation of limbs since Okada, became a cornerstone of the NDC manifesto.

A good decision under such circumstance is to offer alternative occupation which is what government has on the drawing board and about which it has already held consultations with germane interest groups on the subject. For a government with a track record of walking its talks joblessness would not be the lot of the riders when they eventually dismount their motorbikes.

Even in Lagos State in Nigeria and other parts of the federation, the origin of the commuter motorbike business, otherwise known as Okada, the occupation has been banned, of course, for genuine reasons. Okada was the name of an airline in Nigeria, one of the early private ones, the name eventually adopted by the commercial motorbike operators in that country which found its way to Ghana by name and practice.

We are at our wits’ end as to why the former President who did not object to the illegalisation of Okada by Parliament when he was at the helm would now exhibit such hypocrisy. Only a politician desperate and acting upon a high level of unbridled adrenaline would promise a reversal of an illegality because of votes the number of limbs and even lives that would be lost through the senseless decision notwithstanding.

Dr. Frank Serebour, Vice-President of the Ghana Medical Association (GMA), has taken exception to the suggestion of an Okada-permitted Ghana. Undoubtedly, he has spoken for surgeons who have had to take the hard decisions of amputating the limbs of Okada accident victims.

At a time when we should be discussing infrastructure, to wit, the dualisation of our highways and above all resuscitating the dead railway system in the country but now receiving attention, we have been shepherded into conversing about Okada as a nation.

Of course, this is political mediocrity, which infectious as it is, has infected many. Perhaps by this decisive announcement by Dr. Bawumia, we have put paid to an unproductive parley.

Okada riders deserve better than being restricted to the life-risking occupation on the streets of Accra, pawns in the messy political chess game of the NDC.