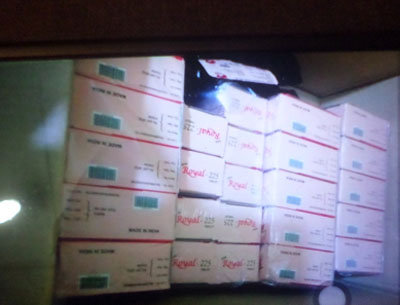 The 39 boxes of the unapproved tramadol

Boxes containing unapproved doses of tramadol hydrochride (225 mg tablets) have been intercepted by the police in the Brong-Ahafo Region.

One Isaiah Akannyi, who was in possession of the boxes, had loaded the boxes into a mini Ssangyoung vehicle, which he was in charge of.

The suspect, according to the police, was arrested at about 1:30am by police when they were on their usual patrol duties on Atebubu-Ejura highways, near Jato Zongo in the Atebubu Amanting District.

The police said the suspect has refused to give any tangible reasons as to where he got the items from or where he was sending the prohibited items to.

The Brong-Ahafo Regional Police PRO, Chief Inspector Augustine Kinsley Oppong, confirmed the arrest to DAILY GUIDE, but said the suspect has been detained for further questioning whilst the exhibits have been kept in police custody for further analysis.