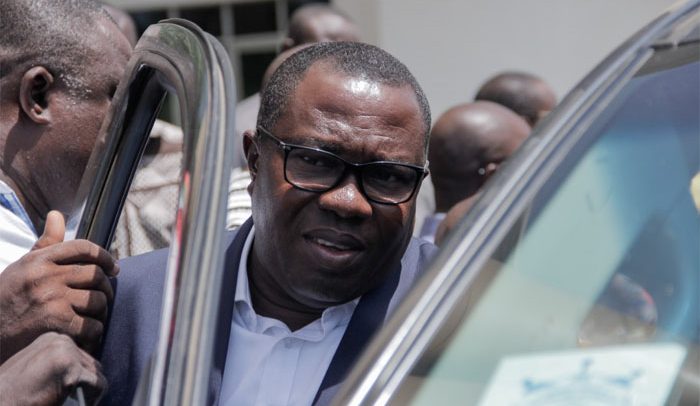 Police are said to have arrested him earlier this afternoon in Accra apparently in connection with alleged arson and kidnappings in Ghana.

DGN Online is informed that Mr. Ofosu Ampofo had been hopping from hotel to hotel and has refused to stay home after getting wind of his likely arrest after a high court issued an arrest warrant.

The National Democratic Congress (NDC) had earlier raised alarm that Government was making moves to arrest its National Chairman.

According to the opposition party, it (NDC) had learnt that the government, using the security agencies, has obtained a court warrant in the past few days for the arrest of our national Chairman, Hon. Samuel Ofosu-Ampofo.”

The NDC made this known in a statement issued on Sunday, June 9, 2019, and signed by its Director of Communications, Kakra Essamuah.

The statement indicated “we have further learnt that the security agencies intend to do this apparently in conjunction with elements of NPP vigilante forces and that they intend to arrest the Chairman in a manner aimed at lowering him in the esteem of Ghanaians.”

Mr. Ofosu Ampofo is standing trial over a leaked tape in which a voice purported to be his is heard calling for political kidnappings and assassinations of some persons in Ghana.

Ever since there had been several cases of kidnappings and market fires which the police had report linking the NDC chairman to some of the cases.

In the leaked audio, the NDC Chairman is heard purportedly declaring ruthless war against the Chairperson of the Electoral Commission (EC), Jean Mensa.

There has been series of kidnappings since the leaked tape surfaced. Three girls from Takoradi in the Western Region have remained in captivity since they were kidnapped some months ago.
An Indian businessman was kidnapped in Kumasi some weeks ago.

And recently, two Canadian women were kidnapped in Kumasi as well.

It would be recalled that some weeks ago, the Criminal Investigation Department (CID) of the Ghana Police Service once again invited Mr. Ofosu Ampofo for ‘questioning’ as the CID claimed that suspects that have so far been arrested in connection with kidnappings and arson had mentioned Mr. Ofosu Ampofo’s name as the ‘mastermind’ behind the two mentioned crimes.

But the NDC at the time ‘blocked’ its Chairman from honoring the CID’s invitation, saying he was already standing trial.

DGN Online understands that the Police went to get an arrest warrant because it would set a bad precedent if nothing was done to arrest after he publicly defied the invitation extended to him.

The presiding judge was said to be satisfied to issue an arrest and search warrant on the runaway NDC chairman who has been avoiding service running from hotel to hotel.

In its latest statement, the party said “the NDC takes a very serious view of the government’s intention, if our information is correct, and wish to bring to the attention of the country that, as the Chairman of the largest opposition party in Ghana, our national Chairman is entitled to be treated with the utmost respect and dignity.”

It said “whilst still respecting the already-stated stance of the Council of Elders regarding police invitations, we wish to state that the national Chairman is a law-abiding citizen who will never flout an order properly obtained from a court with authority to do so.”

“This statement is also issued to notify the teeming supporters of the National Democratic Congress to expect the imminent arrest of the national Chairman for the purpose of advancing the narrow political interests of President Akufo-Addo to silence all legitimate political opposition,” it said.

It added that “at all times, the national Chairman of our party can count on the solidarity of the entire membership of the party and we stand solidly behind Hon. Samuel Ofosu-Ampofo.”