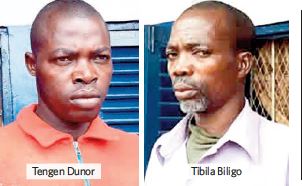 2The quiet Sisala town of Hamile in the Upper West Region appears to be on the radar of suspected terrorists, as a second Burkinabe has breached our frontiers with a firearm.

Tengen Dunor was said to have crossed the border illegally to buy alcohol when he was arrested upon a tip-off last Wednesday.

Owing to heightened security in the country, the man has been swiftly brought to Accra for further interrogation and action by the relevant security agencies.

His story of coming to Ghana to buy an alcoholic beverage did not appear to convince the security agents, especially as he showed several rounds of ammunition.

Earlier, a Burkinabe national went to a Roman Catholic Church armed with a fully loaded pistol, but was busted after two persons became suspicious about him and alerted the police.

There is a marked state of vigilance among the population at Hamile due to the second arrest of a suspected terrorist in the town.

During his Eid-ul-Fitr address at the Independence Square last Wednesday, President Akufo-Addo commended the two persons who busted the suspected Burkinabe terrorist.

He went on to encourage citizens to report suspicious persons to the security agencies for the necessary action to be taken.

Terrorists with links to ISIS are active in Burkina Faso and Mali. They have engaged in deadly firefights with local forces.

French marines recently engaged some terrorists in Burkina in a bid to rescue Western hostages. Although the soldiers succeeded in their bid, they lost two of their men.

The issue of beefing up Ghana’s security and the retooling of the Ghana Armed Forces (GAF) popped up a few months ago when security experts revealed that Ghana’s proximity to Burkina Faso, a terrorist infested country, should prick the conscience of Ghanaians not to drop their guard.

While every effort is being made not to press the alarm button and create fear and panic among the population, there is no denying the fact that the terrorists are close by and will attempt to make incursions when it suits their purpose.

What to do? Sensitize the people especially along frontier towns to be vigilant and alert the security agencies when they spot suspicious looking persons veering into Ghana from Burkina Faso, so say the security experts.