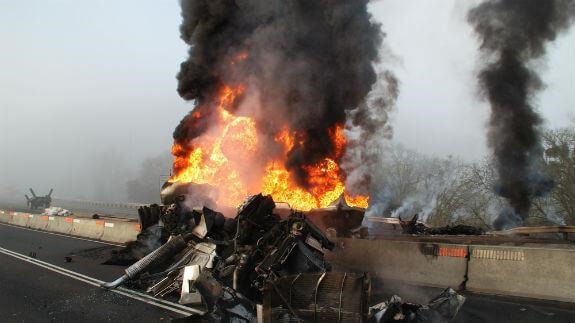 The National Disaster Management Organization (NADMO) is mobilizing resources to resettle some 104 displaced persons at Onyinanumfo in the Ahafo-Ano South-West District of the Ashanti Region.

The affected residents, currently putting up in make-shift abodes in the community, were displaced when their houses got burnt after a fuel tanker caught fire in an accident on Monday, May 24.

Regional Coordinator of NADMO, Kwabena Nsenkyire, told the Ghana News Agency (GNA) media, that majority of those affected had since been provided with mattresses and other relief items.

Three people, including a two-year-old boy, perished when the speeding fuel tanker, reportedly carrying diesel from Kumasi, which was to be off-loaded at Tepa, caught fire after hitting a parked sprinter bus on reaching a sharp curve at the said community.

The incident resulted in the injury of the five occupants of the bus, and had since been sent to the hospital for treatment, while the body of the deceased had also been deposited at the morgue for autopsy.

Divisional Officer (DO) III, Desmond Ackah, the Regional Public Relations Officer of the Ghana National Fire service (GNFS), had told the GNA, that the driver in-charge of the tanker, identified only as Mohammed, and his mate, were burnt to death.

The intensity of the inferno, he said, was such that the GNFS had to call for additional fire tenders from the nearby districts and the Ahafo Region in order to bring the situation under control.

District NADMO Coordinator, Simon Boateng in an interview, said the two-year-old boy, identified as Agya Owusu, was taking a nap in one of the houses at the farming community when the incident occurred.

“Most of the houses, caught in the spreading fire, were demolished by the inferno, forcing the terrified residents to run for their lives,” he told the GNA.

2 In Police Grips In Ho For Robbery