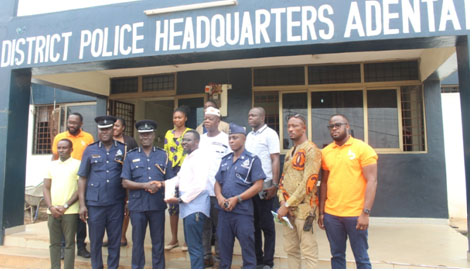 Four divisional headquarters of the Ghana police service have benefited from a free internet solutions system from Busy Internet.

The beneficiary divisions; Madina, Adenta, Kaneshie, and Amasaman will enjoy a complete internet solution for a year, free of charge.

The commendable gesture from the internet provider was aimed at equipping the law enforcement agency with the needed technological tool to improve their day to day operations.

Nana Kwabena Adu-Hene, Technology Director, Busy Internet in a meeting with the Adenta District Police command said the company decided to support the police service as part of their Corporate Social Responsibility (CSR).

He noted that as the world becomes sophisticated there was the need for the law enforcement agency to be equipped with the right tools to be able to discharge their duties effectively.

Busy Internet’s Head of Marketing, Thomas R. Brien-Mensah also noted that the installation of the internet connectivity at the aforementioned divisions was to also help combat crime.

“Busy Internet also has plans to extend a similar gesture to the police divisional commands within the Greater Accra and Tema regions respectively,” he revealed.

“The speed and everything is very good and we really appreciate this gesture by Busy Internet,” ACP Frank Faakye Kumi said.

The Adenta Police revealed that before Busy came to their aid, they were using their own monies to buy data to access information on the internet hence the effort by Busy has been timely and greatly supportive.

From launching as the biggest internet cafe in the sub-region, Busy Internet has over time evolved to provide enterprise solutions to businesses and then finally launching its 4G mobile broadband services in January 2016.