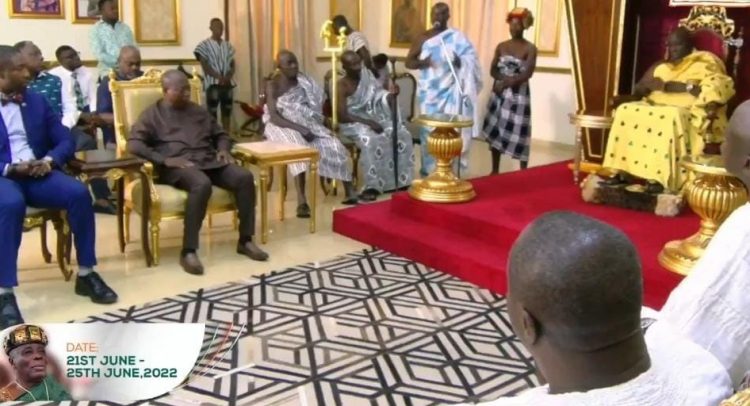 Chief Executive Officer of the National Health Insurance Authorpty (NHIA), Dr. Okoe Boye has announced that from next month July, children who are suffering from cancer and sickle cell diseases will benefit from the NHIA scheme once they are registered for free.

According to him, the new initiatives form part of the Akufo-Addo/Bawumia-led government flagship programs which the NHIS is bringing on board to benefit the Ghanaian population.

Dr. Oko Boye said this when he paid a courtesy call on the Okyenhene, Osagyefuo Amoatia Ofori to officially introduced himself as the NHIA Boss and also seek advice from the Akyem Abuakwa Overlord at the Ofori Panin, Kyebi in the Abuakwa South Municipality of the Eastern Region on Wednesday.

Speaking on the new initiative by the government, he said “Through Nana Akufo-Addo, we are coming up with new initiatives, today we have extended the health insurance to cover certain things at first it will not cover.

“At first the insurance does not cover children who suffer from cancer but now from next month July children with cancer will be treated free once they have registered on the health insurance,” he said.

“The second one is about children with sickle cell. There is a special medicine called hydroxyzine urea that we have been able to get through the able leadership of Nana Akufo-Addo, and this medicine when given to a sickle cell patient takes away the pains and gives them the quality of lives they deserve to live long without any suffering therefore from next month health insurance will take care of sickle cell patients”

He added that “our law says if you are 70 years and above and you register for health insurance, you don’t have to pay any premium, you only have to pay processing fees, GHC 5 for rural area dwellers and GHC7 for those in the cities and it takes one month before your card begins to work so we have realized that it is affecting most of the elderly in our society since they get stranded at most hospitals”.

“Because of that my board chairman has given me the green light to announce to Ghanaians that from next month if you are 70 years and above and you register your NHIS card, there will be instant card activation for all such persons who fall within that category”.

Osagyefuo Amoatia Ofori Panyin, in his address, applauded the NHIA for the new interventions taken by the government to deliver proper health care for the citizens.

Speaking further, the Okyenhene, noted that “Material wealth is a by-product. Today, look at this Kufuor’s NHIS that we are all benefiting, if he had not dreamt about it would it have existed? Some people even rose against it, the same way people said all sorts of things about Nana Addo’s free SHS but look at the benefit it will serve the country in 20 to 30 years to come, those are what we called responsible heads of household and responsible leadership, they do not think about today, they think about tomorrow”.

Osagyefuo further hailed the government for the introduction of what he described as “future benefit policies” such as planting for food and jobs, free SHS, Ghana beyond aid, and further urged the government to review the condition of service of the Ghana Medical Service to retain most of the doctors we train in the country to work for mother Ghana.