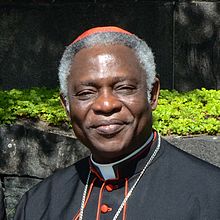 Cardinal Peter Appiah Turkson has dismissed rumours that he resigned from his position as the Head of the Vatican’s Dicastery for Integral Human Development last year, insisting that the reports were unfounded.

According to him, it was strange that his notification to the Pope, having finished serving his two consecutive five-year terms, was interpreted as a resignation.

Speaking on Asaase Radio in Accra yesterday, Cardinal Turkson explained that “here in the Vatican, every position is given for five years, and at the end of the five years, either the term is extended, renewed or one is reassigned to some other position.”

“I left Ghana in 2010, that means I have been here (referring to the Vatican) for 11 years which means I’ve done two terms of five years.”

“I have had this experience before. At the end of the set of five years, my mandate was slightly modified and extended. When I came here, I was to take charge of an office called Justice and Peace, and at the end of five years it had a merger,” the soft spoken Cardinal said.

“So this is what happened last year. The Pope decided to reassign and you move on and that’s just what happened; you have to notify the Pope that your five years are up and doing that it’s not resignation, it’s just a notification,” he stressed.

Some international media outlets reported in December last year that, Cardinal Peter Turkson, seen by many as a candidate to become the first African Pope in about 1,500 years, had abruptly offered his resignation from a key Vatican department.

But Cardinal Turkson, 73, said in the Italian language, “we say that you put your mandate back to his hands for him to reassign, extend, modify or do what he wants to do with it. So that’s just what happened.”

“Why this was seen and interpreted as resignation beats my imagination and as a result of that, I tweeted to explain all of these, but people took things the way they wanted to take it,” he stated.

For him, there was nothing to get him upset about the misinformation, saying, “If you wanted to put it more bluntly, we’ll probably say that within the church in our circus, the saying is that: nobody goes up the cross and then descends from the cross.

“Jesus didn’t go to the cross and then decided to come off the cross, so when you engage in the service of the church I think you go all the way.

“I don’t know why it made such rounds around the world and generated all the discussions.”