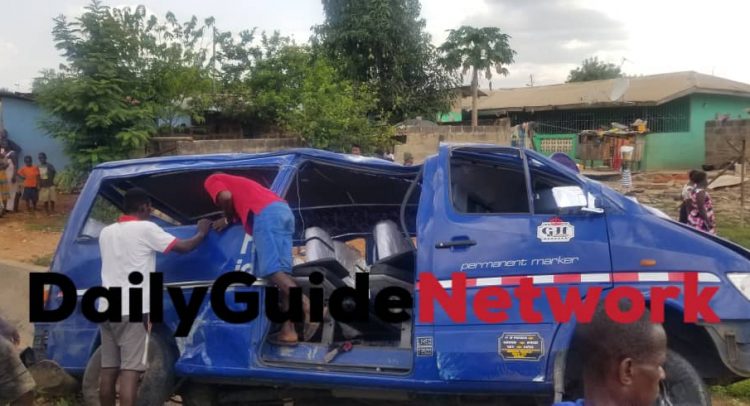 FIVE persons have met their untimely death at Obretema, a community along the Accra-Kumasi Highway in the Eastern Region.

The Sunday afternoon crash occurred when a ‘careless’ driver on top speed burst one of its tyres and somersaulted.

He was travelling from Kumasi with passengers to Accra.

Eastern Regional MTTD Commander, DSP Stephen Ahiatafu who confirmed the incident to DGN Online said the driver on reaching a section of the road at Obretema near Suhum claimed that his offside rear tyre suddenly got burst whilst the vehicle was in motion.

The Regional MTTD boss said, in the process, the driver lost control of the steering wheel and the vehicle somersaulted and landed into a ditch.

“Three male and two female adults who were on board the bus died on the spot and the rest of about 15 persons were rushed to Suhum Government Hospital for treatment” DSP Ahiatafu stated.

He said the bodies were removed and sent to the same hospital mortuary pending autopsy.

He added that the Police from Suhum, when had the information stormed the scene and towed the accident vehicle to the station for testing.

Meanwhile, some of the injured victims who spoke to DGN Online at press time said the driver was driving on top speed and even had his tyre blasted at Nkawkaw which he fixed before continuing the journey.

They said, they were complaining bitterly about his reckless driving but he did not listen to them.