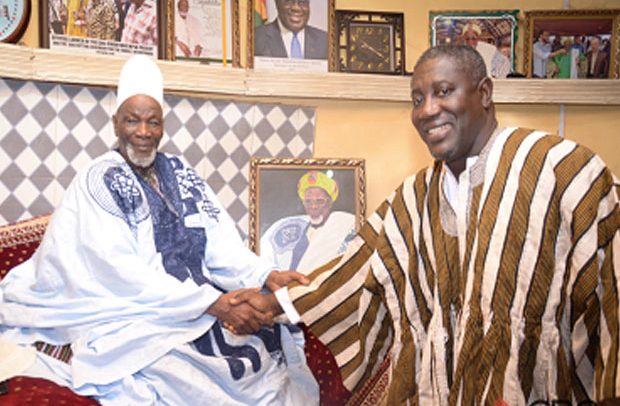 MANAGING DIRECTOR (MD) of Consolidated Bank Ghana Ltd (CBG), Daniel Wilson Addo, has said the northern sector is very important to the bank and therefore the bank cannot take for granted the north’s contribution to the growth of its business.

He explained that the north was one of the few regions that had abundant natural resources and as a bank, CBG was seeking to partner its customers to explore the opportunity, by  providing safe, secure and differentiated banking services.

Addo was speaking in Tamale when he and his team paid a working visit to the new overlord of Dagbon, Ya Naa Abubakari Mahama II at the Naa Gbewaa Palace, Yendi, as part of the bank’s policy of engaging stakeholders on CBG’s vision and commitment to aid national development.

Addressing the CBG team led by the MD Addo, the King of Dagbon commended the bank for paying a courtesy call on him and the Dagbon Kingdom. He said his doors were open and his majesty’s prayers would follow CBG to enable the bank achieve its mission and vision.

“I appreciate you for showing respect to me and the people of Dagbon with your noble visit. I pledge to support the bank fully both physically and spiritually” he said.

Ya Naa Abubakari Mahama II expressed the north’s recognition of CBG’s effort to deliver differentiated services to the sector and pledged his support for CBG’s demonstration of commitment to build trust and providing seamless banking services to its customers since inception.

Addo expressed appreciation to the king and his leadership for receiving the CBG team. He added that the bank had invested greatly in the north by providing seven branches as part of its commitment to make banking all-inclusive and accessible to all with its 114 branches across Ghana.

CBG recently reported it had moved from a negative position to post profit, in a challenging banking environment in less than a year because of prudent management practices. The bank’s 2019 second quarter results show a profit after tax of ¢41.1 million, representing about 280 per cent improvement on performance over the 2018 financial results.

The total assets of the bank also went up from GH¢7.5 billion to GH¢8.3 billion, representing a growth of 11%, thereby cementing CBG, as one of the largest financial brands in Ghana.