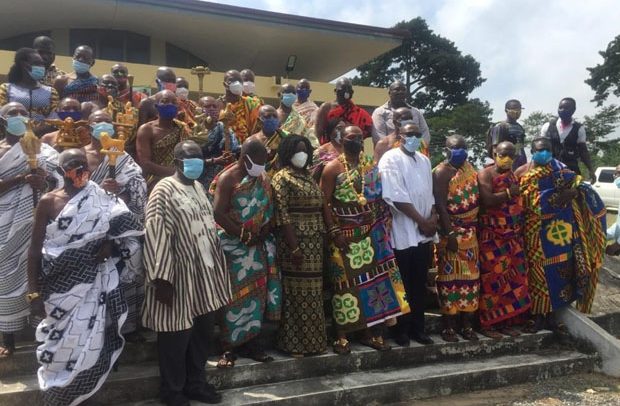 The Central Regional House of Chiefs has rallied the support for Professor Jane Naana Opoku-Agyemang, the National Democratic Congress (NDC) running mate to succeed in her new political role.

The House described her nomination as unprecedented and an affirmation of her enormous academic prowess and exemplary traits as a transformational leader.

Obrempong Nyanful Krampah XI, the Paramount Chief of Gomoa Ajumako Traditional Area and the President of the Regional House of Chiefs made the call, when Prof Opoku-Agyemang paid a courtesy call on the House at its first general meeting on Thursday, in Cape Coast.

Her visit formed part of her three-day working tour to introduce herself to the chiefs and the people of her home region and to seek their blessings ahead of the December poll.

Obrempong Nyanful Krampah XI urged Prof Opoku-Agyemang to continue playing her exemplary motherly love and care and to bring to bear her distinguished credentials and conscientious public servant virtues for all to emulate.

He charged her not to engage in politics of settling personal scores but to do well to clean Ghana’s political space engulfed with insults and acrimony.

“We believe that her nomination holds the key to cleaning up the growing political mess” because she is an epitome of truthfulness, decency, respect, humility, and strong mental fortitude to resolving all issues to ensure socio-economic cohesion.”

Prof. Opoku-Agyemang thanked the House for granting her audience to seek their blessings for her new political role and prayed for their support.

Chairman of the Party Samuel Ofosu Ampofo, who led the delegation described the Central Region as pivotal and strategic to the electoral fortunes of the Party since 1992.

Mr Ampofo described Opoku-Agyemang’s nomination as unprecedented and historic, signifying the prestige and honour the Party gave to the Region and women.

No Accident Car Importation Into Ghana From November, 2020

1D1F: Merker Africa To Establish A Factory In Ghana