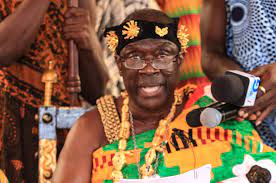 It has emerged that the Chief of Challa, Nana Addo Kanawo Kyedre II, who was captured on video singing the praises of former President John Dramani Mahama and making wild allegations that the 2020 elections were a stolen verdict, spoke in his capacity and did not on behalf of the Chiefs in the Oti Region.

Speaking at a Press Conference over the weekend, President of the Oti Regional House of Chiefs, Nana Mprah Besemuna III distanced the House from the said Chief who has been identified as the Chief of Challa, a division under the Akyoda Traditional area in the Nkwanta South Municipality of the Oti region.

The Challa Chief, Nana Addo Kanawo Kyedre II during the Oti version of the “Thank You” tour of the NDC’s 2020 flag bearer, noted that Mr. Mahama’s visit was a prelude to the “bigger votes” from the people of the Region in 2024. 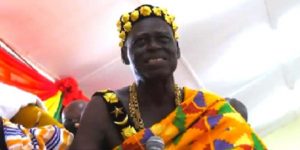 The traditional ruler who is suspected to have been handpicked by the NDC party to hail the former President made wild allegations and unfounded claims including the assertion that the 2020 elections were a stolen verdict.

He said but for the former President’s God-fearing nature, respect for the tenets of law, and refusal to cling to power, he would have “plunged this dear nation of ours into an unparalleled state of pandemonium or simply into a state of higgledy-piggledy.

Which will have been too nasty to contemplate when the people’s verdict in the 2020 general election was simply throttled upon and shamefully stolen.” 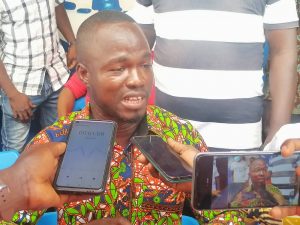 “During your term of office as President of Ghana, Ghana was revered as the icon of democracy and the oasis of peace in Africa. Is it so today?” He, therefore, told the former president to ignore those who condemned his ‘do or die’ comment because he (Mahama) was not “responsible for sending soldiers to maim and kill people during elections.”

Nana Kanawo stressed that “with the unflinching support of the stalwarts of the great NDC and the numerous loyal activists and supporters of the country. The Presidency of the country is yours for the taking come 2024 even without reference to do or die.”

His comments which have since gone viral and received many condemnations seem to be consistent with the claims being made by the former President in his ‘Thank You.

Reacting to the claims of the Challa Chief, the President of the Oti House of Chiefs, and Krachiwura, Nana Mprah Besemuna reiterated that the said chief is not the spokesperson of the house of Chiefs in the region, hence must not be seen as such.

In another press conference, the NPP in the Oti Region have also reiterated that Nana Kanawo Kyedre is not a Paramount Chief or member of the House of Chiefs. Mr. Seidu Musah, the Communication Director of the NPP in Oti alleged that the Challa chief was a beneficiary of a Navara pick-up truck shared to chiefs by the NDC government before the 2016 general elections.

To this end, it was not surprising that the Chief was showering praises on President Mahama who was overwhelmingly rejected by Ghanaians in both 2016 and 2020 elections and would reject him again in 2024.

He noted that  President Akufo-Addo did not only grant Oti’s wish for a region, he has also undertaken major developmental projects like Krachi town roads, Eastern Corridor road from Hohoe to – Dodo Pepesu road, Dambai Town roads, Nkonya Wurupong-Kwamekrom road and Nkwanta-Shiare-Chillinga road. The rest are Jasikan – Worawora road, Nkwanta – Kpassa Damanko portion of the eastern corridor project and many more. Equally, on hospitals, the Oti region alone has at least four District hospitals in Chinderi, Kpassa and Kadjebi under government agenda 111 programme as well as a regional hospital in Dambai.