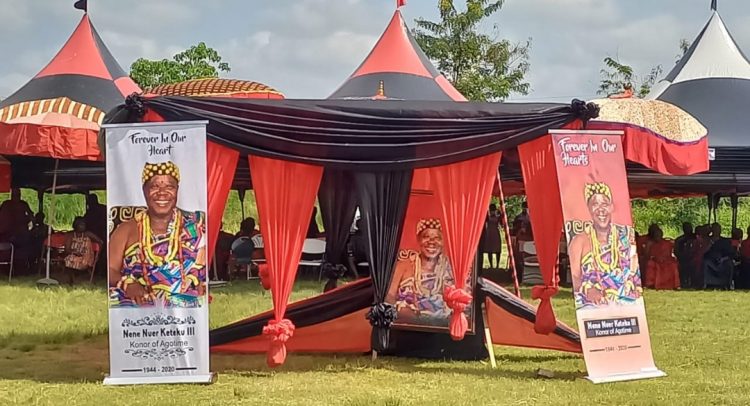 The entire Agotime Traditional Area in the Agotime-Ziope District of the Volta Region came to a standstill when the Konor of the area, Nene Nuer Keteku III was laid to rest after his passing about a year ago.

The final funeral rites which lasted for 10 days; starting from Friday, November 12, to Monday, November 22, 2021, saw a rich display of the culture of Agotime people.

The rhythmic traditional drumming coupled with the breathtaking display of Borborbor dance was in full display. 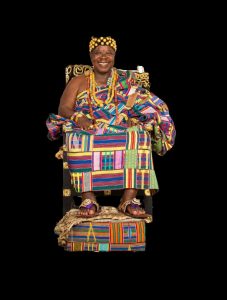 Several events commemorating the funeral had Chiefs, Queenmothers, and residents of Agotime Traditional Area bidding their final farewell to the late ‘Konor’ in a unique fashion.

As part of the funeral, a burial service was held on Saturday, November 20 at the Evangelical Presbyterian (EP) Park in Kpetoe; the paramountcy and district capital, followed by a grand durbar of Chiefs and Queenmothers.

The new Konor of the Agotime Traditional Area, Nene Nuer Keteku IV described his predecessor as a man of many parts; a man who was a disciplinarian and at the same time humorous.

Furthermore, he said the late Chief inspired the youth with real-life experiences. He said, “Nene told stories of his experiences to serve as guiding principles to the youth anytime he had the chance to be with them.”

“He was culturally immersed so much that he became the repository of knowledge on Agotime culture and tradition, and all the elements in him blended well as a good man,” the new Konor observed.

In a tribute, the children of the late Chief described their father as a good man who spoke with noticeable decorum and communicated simply and effectively. They recounted their father’s sense of humour which they said was a soothing relief to the weary.

“Our father liked reading novels especially in spheres of politics, detective, legal, and culture, and always loved to share the contents with us,” they reminisced.

Osie Adzatekpor VII, Paramount Chief of Avatime Traditional Area who led some Chiefs who represented the Volta Regional House of Chiefs, praised the late ‘Konor’ for his active contributions in the House and role in growing the Chieftaincy institution in the country.

Several other tributes were read in honor of the late Chief. Some of which came from Chiefs and Queenmothers of Agotime, grandchildren, in-laws, Eastern Regional House of Chiefs, religious bodies, political groups, and friends from Ghana and the diaspora including the Republic of Togo, where Konor has jurisdiction over some of the border communities.

The Reverend Dr. Setorwu Ofori, Moderator of the Global Evangelical Church, in a sermon emphasized the unique role of Chiefs and culture in the lives of mankind and even the gospel. He observed that history has shown that, “chiefs have played key roles.”

He, therefore, urged all and sundry to appreciate this role of chiefs and culture in all aspects of their lives.

He attended the Roman Catholic Mission School in 1954 at Kpetoe for his seventh standard education before proceeding to the Jasikan Training College in 1965 as a trainee teacher.

In his final year, he ascended the great Ntsrifua Stool of Agotime as the Konor (paramount chief) of the 37 towns and villages of Agotime (Ghana/Togo) where he was enstooled as Nene Neur Keteku III of Agotime Traditional Area on October 24, 1969.

The late ‘Konor’ is believed to have been instrumental in making Kpetoe the capital of the then Adaklu -Anyigbe District which is now Agotime-Ziope District. He also played a key role in the establishment of the Ghana Revenue Authority (GRA) Training School in Kpetoe and the Agotime Senior High School.

Despite his cultural and traditional obligations as the occupier of the mystical Ntsrifua stool, he was a staunch member of the Global Evangelical Church.

Nene has also been instrumental in reviving the Ewe Kente culture and production in the Traditional area, through the revised annual Agbamevorza (Kente Festival)

In 2019, the late ‘Konor’ complained of some illness that made him a regular visitor to the Volta Regional Hospital. He finally joined his ancestors on June 4, 2020.

He was 76 years old and left behind six children.

He reigned for 51 years.