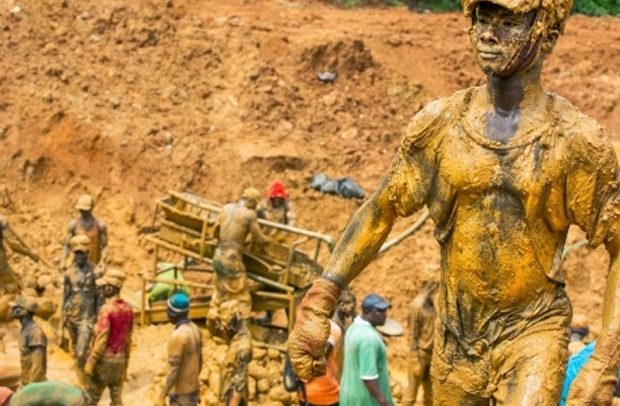 THE CHIEF of Kwesikrom in the Ahanta West Municipality of the Western Region, Nana Emu Agyemang VIII, has cautioned his colleague chiefs who give out lands for illegal mining activities to desist from such an act.

He has, also appealed to the chiefs to be actively involved in calling illegal miners or galamseyers operating in their respective areas to order, and desist from shielding them since their operations were destroying the environment including river bodies.

He, therefore, praised the Odikro of the area and his Asafo group, for their efforts in arresting an alleged galamsey kingpin at Agona Banso last Saturday.

He was happy that traditional leaders were now complementing government’s efforts at halting all illegal mining activities adding “But any chief who allows illegal mining in his area would be dealt with according to the law.”

He said, “The chiefs would allow the law to take its course if anyone is arrested engaging in galamsey on any Ahanta land.”

“We will also deal with any chief who is caught getting himself involved in galamsey,” he said adding that the arrested galamsey kingpin, whose name he did not mention, has been transferred to the Sekondi District Police Command to be processed for court.

In a related development, the Chief of Ekrakrom in the municipality, Nana Duakuko II, has also warned those claiming ownership of his land to desist from that illegality.

He said, “We have arrested some trespassers claiming ownership of our lands and we want the general public to know that they need to negotiate with the right people when it comes to purchasing parcels of lands in his area.”