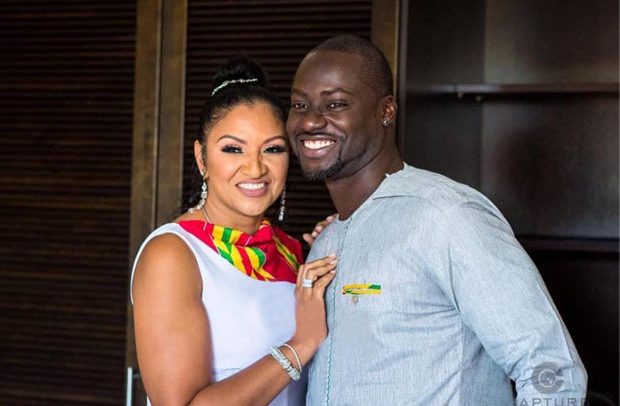 Chris Attoh and his new wife

Actor Chris Attoh over the weekend said ‘I do’ to his USA-based girlfriend, only named as Betty, to seal his second marriage.

This was at a private ceremony held at North Kaneshie in Accra on Saturday, October 6.

The marriage comes 13 months after his divorce with Nigerian actress Damilola Adegbite. He tied the knot with Damilola in 2015 and had their son (Brian), but they decided to go their separate ways in 2017.

Even though Chris confirmed the divorce, he stayed away from talking about what caused their divorce.

But then, he said the reason most marriages don’t work is that “we have forgotten what the fundamentals of marriage are. When you love someone it is important to be able to forgive, to be able to respect, to be able to submit. As a woman, you need to trust the captain of the ship. It’s really important if you want peace in your home.”

Damilola has not really addressed their divorce, but indications are she may be publishing a book sometime to come and she may talk about her marriage.

However as it is now, Chris has moved on.

There is no much information about the new wife. But some media reports over the weekend tagged her as Betty, while others called her Better Jennifer, a Caribbean who is based in the United States of America.

Even though Chris has been involved in some productions out there in the USA, indications are that he is always out there in America because of Betty.

He returned to Ghana with Betty for their marriage ceremony and for the premiere of his new movie, ‘Bad Luck Joe’ on Friday.

On Saturday, he shared photographs of himself kissing his new wife after reports of their wedding went viral.

“I want to thank God for his love and for hearing my prayers, indeed, when the sun appears, all things are suddenly seen with clarity!!! Thank you Jesus, thank you Lord,” he said underneath the photograph in addition to love emojis.