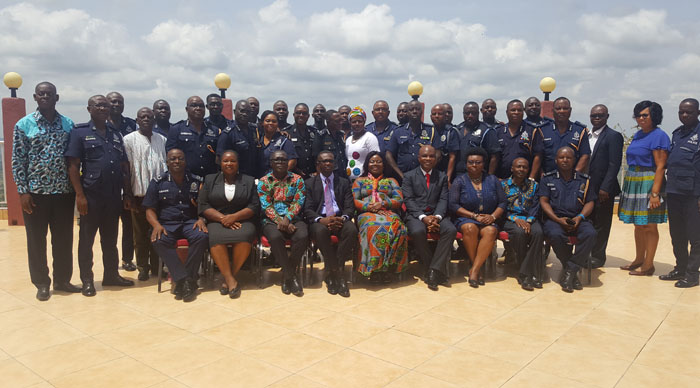 The Criminal Investigations Department (CID) of the police headquarters in collaboration with the Domestic Violence and Victim Support Unit have organised a two day workshop for divisional and district commanders on sexual and gender based violence and reproductive health rights at Larteh in the Eastern Region.

The training workshop funded by the United Nations Population Fund (UNFPA) was aimed at educating the senior police officers on gender based issues for them to rightly supervise investigators on such cases when they are reported.

At the opening ceremony, the Director General of the Criminal Investigations Department, Commissioner of Police, Maame Yaa Tiwaa Addo Danquah, said   on assumption into office, she received several complaints of DOVVSU investigators not investigating cases well but could not query them because she realized they lacked training.

“We organised training for 240 personnel and intend organizing another one to train additional 240.

She said participants for this workshop were carefully selected since they would supervise the investigators who are handling domestic violence cases.

“We believe that when the divisional commanders upgrade their knowledge on DOVVSU related cases, they will make sure that investigators handling such cases handle it well,” she added.

Adding his voice, the United Nations Population Fund Representative In Ghana, Bawa Amadu said sexual and Gender Based Violence (SGBV) poses significant risks to the health and well- being of women and girls including physical injuries and psychological trauma.

“It is therefore incumbent on the police as a protection and law enforcement body to ensure that these abuses are duly dealt with.

Adding he noted that failure to do so can impact negatively on the justice delivery for victims, hence the necessity of this training workshop for an effective and objective supervision and management of SGBV cases.

The national coordinator of the domestic violence and victim support unit, Superintendent Evelyn Borbor in an address, thanked UNFPA for its continuous support and collaborative working relationships with DOVVSU.

She noted that UNFPA have supported DOVVSU’s activities to enable the unit adhere to high professional standards.