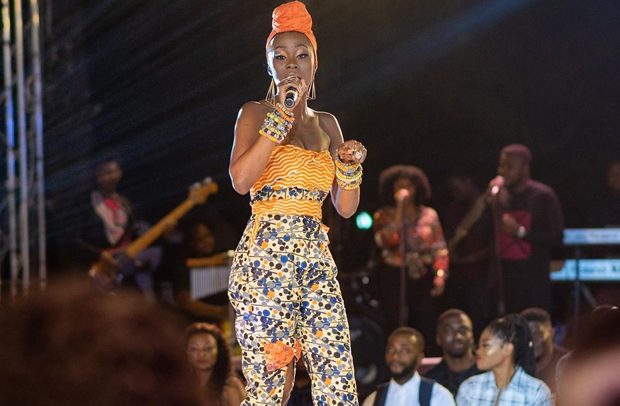 Female songwriter and recording artiste Christie Quincyna Quarcoopome, known in showbiz as Cina Soul, last Saturday became the toast of music fans when she put up a splendid performance at the maiden edition of the Chartered Insurance Institute of Ghana Awards (CIIG).

The awards ceremony held at the Labadi Beach Hotel in Accra was organised to celebrate excellence in Ghana’s Insurance Industry by recognising deserving individuals and institutions that have contributed to the growth of the industry.

Cina Soul, who performed songs like Ojorley, Killi Mi, among others demonstrated her singing prowess which left no doubt in anyone’s mind that she is truly a force to reckon with.

She was able to thrill the audience to their satisfaction, and treated the excited audience to some serious dance moves on stage.

In an interview with BEATWAVES, Cina Soul called for peace in the December 7 polls and entreated electorates to reject offers from politicians to cause violence.

A product of Aburi Girls’ Senior High School and the University of Ghana where she studied Psychology and Archaeology, Cina Soul is an amazing singer who came into the limelight after emerging as the first runner-up at the Vodafone Icons remix edition.

She released her debut album, Metanioa featuring M.anifest, Worlasi and Kidi in 2016.

Cina Soul in 2018 released her first single after her EP, which led to her being signed by Universal Music Group in Nigeria.

She won VGMA 2019 best video with the song Killi Mi and MTN 4SYTE TV Music Video Awards best photography with Ojorley song, and has received over eight nominations since her career as an artist.