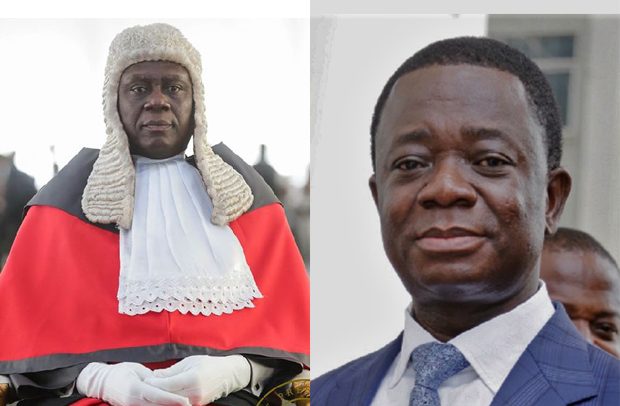 Dr. Stephen Opuni, a former Chief Executive Officer of Ghana Cocoa Board (COCOBOD), has once again failed in his attempts to get Justice Clemence Jackson Honyenuga, a Supreme Court judge sitting as an additional High Court judge, off his trial.

This follows the decision of Chief Justice Anin Yeboah, to turn down a petition filed by the embattled former COCOBOD boss against the trial judge, on allegation of bias.

The Chief Justice in his response to the petition indicated that he noticed that the learned judge has not made any prejudicial statements that will result in a real likelihood of bias against the accused person.

Dr. Opuni, who is standing trial together with businessman, Seidu Agongo and the businessman’s Agricult Ghana Limited, for allegedly causing over GH¢217 million financial loss to the state, was ordered by the trial judge on May 7, 2021, to open his defense after the prosecution had closed its case.

But he has since filed multiple applications before the court, including a stay of proceedings, one of which was filed at the Court of Appeal and was dismissed.

He had earlier filed an application before the court asking Justice Honyenuga to recuse himself from the trial.

His lawyer, Samuel Codjoe, in moving the application canvassed the issue of bias, as well as not being given adequate time and facilities to defend himself, as grounds for the judge to recuse himself.

The application was dismissed by the court, which held that it was brought in bad faith.

Dr. Opuni was expected to open his defense after the Court of Appeal dismissed his application for stay of proceedings on the ground that no miscarriages of justice would be occasioned if the trial went ahead.

But he petitioned the Chief Justice to remove the judge from the ongoing trial, after failing to get the judge off the case in court.

The CJ in his response has noted that having looked at the petition, the trial judge, Justice Honyenuga has not made any serious prejudicial statements to infer any likelihood of bias against Dr. Opuni.

“Your petition in respect of the above subject matter has been considered after serious thought. I have noticed from the petition that the learned judge has not made any prejudicial statements to infer that there is a real likelihood of bias against you as an accused person; in the case in which you are yet to open your defense,” the Chief Justice said.

The Chief Justice, therefore, declined the request by Dr. Opuni for the case to be transferred to another judge since he did not establish any likelihood of bias toward him by the trial judge.

“In view of the fact that no serious allegation of likelihood of bias has been established, I will decline the invitation to transfer the case to another judge. This does not preclude you, in the exercise of your constitutional rights to resort to the juridical process for the transfer you are respectfully requesting for,” the Chief Justice concluded.

Meanwhile, the court has adjourned the case to July 15, 2021, in view of the fact that the lawyer for Dr. Opuni has filed another motion at the Supreme Court asking the highest court to exercise its supervisory power to prohibit Justice Honyenuga from further hearing the case.

Although the judge posited that nothing stops him from further hearing the case based on the Chief Justice’s response to the petition, he indicated that he would, out of respect for the Supreme Court, adjourn the matter and wait for its decision on the motion.

“I must state emphatically that with the direction of the Chief Justice, nothing stops me from continuing this case. However, out of respect for the Supreme Court, where the first accused has filed an application to invoke the supervisory jurisdiction of the court and which application was fixed for July 13, 2021, I would in the circumstances adjourn this case to abide by the judgment of the Supreme Court,” the trial judge said.

The court has also indicated that the prosecution has furnished Dr. Opuni with some documents he had requested as part of discovery.

The former COCOBOD boss through his lawyers had filed an application before the court asking the prosecution to provide him with all the letters written by COCOBOD to other chemical suppliers such as Sidalco, and Wemco, all written on February 25, 2014.

The prosecution has since filed the documents, as Justice Honyenuga before adjourning the case had indicated that “I have also noticed that the Chief State Attorney has complied and filed all the necessary disclosures asked for by the first accused.”