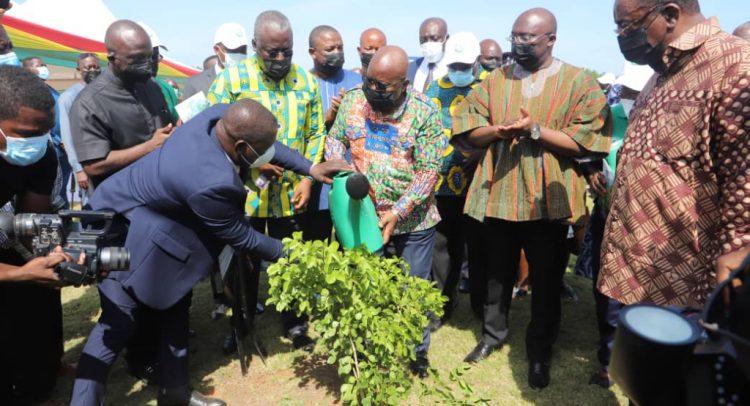 President Akufo-Addo started the nationwide environmental exercise by planting a seedling at the seat of government.

On June 11, 2021, the Ghanaian public undertook a nationwide environmental exercise by planting over 5m seedlings to help salvage the country’s depleted tree cover.

The seedlings were provided by the government (Ministry of Lands and Natural Resources) through the Forestry Commission (FC) for the exercise dubbed, “Green Ghana Day”.

“This is time for action,” said Lands and Natural Resources Minister, Samuel Abu Jinapor during the official launch of the exercise, in Accra. “We are sitting on a time bomb.” 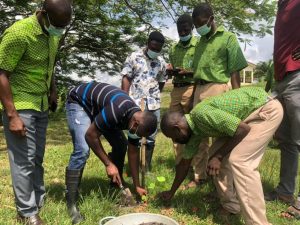 He lamented that the country’s forest cover had depleted as a result of “Galamsey” – a local term for illegal small-scale gold mining- and the harvesting of trees for different purposes.

According to the Food and Agriculture Organization of the United Nations (FAO), Ghana is one of the tropical countries with the highest percentage of rainforest loss in the world. 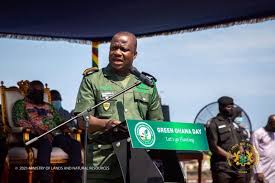 The biggest environmental exercise was aimed at regaining at least one-third of the over 1.31 million-hectares of the country’s lost forest reserve in the long term.

Mr. Jinapor, encouraging the public to sustain the regular planting of the seedling in their neighbourhoods to replace trees fell, said an all-hands-on-deck approach was needed to help Ghana recuperate its depleted tree cover.

For him, the nation stands a better chance to mitigate the adverse effects of climate change.

“I encourage everyone to join hands with the Ministry of Lands and Natural Resources to restore our forest cover. It is said that when the last tree dies, the last man also dies.”

“One way of fighting climate change is to plant trees which will go a long way to help future generations,” he added.

Director of Operations at the Forestry Commission, Hugh Brown, said the “Green Ghana” exercise looked ambitious but gave firm assurance that the government was committed, this time around, to sustain the exercise, at least, for the next five years.

“We’ve had similar projects in the past. Once the seedlings were planted, everybody goes their way and they end up dying. This time around we will make it an annual affair so that it becomes sustainable,” he said.

A few weeks after the exercise Mr. Jinapor appeared before the nation’s parliament to give an account of the progress of the exercise.

He announced that the government’s target for the planting of seedlings to replace trees under the maiden “Green Ghana Day” initiative had been exceeded by two million.

“Reports received from the Forestry Commission (FC) indicate that over seven (7) million seedlings of various tree species were distributed across the country against the ‘Green Ghana’ planting target of five (5) million trees,” he said.

Mr. Jinapor added,“Even though planting figures are still being collated across the sixteen (16) regions, provisional figures from the Forestry Commission clearly show that we exceeded the five (5) million target. This is remarkable and historic.”

According to him, this was made possible due to the immense support of Ghanaians towards the initiative.

He called on Ghanaians to exhibit such togetherness and sense of purpose in all other national activities.

He believes this will make Ghana a better place for the current generation and beyond.

“The aim of Green Ghana is to save us now and our future generations. We can’t fail our future leaders,” he stated.