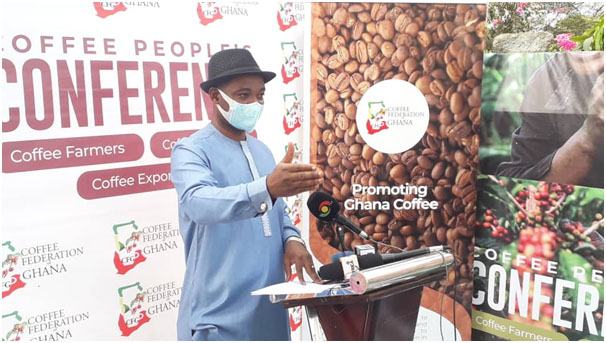 Nathaniel Ebo Nsarku, President of CFG, speaking at the event

PLAYERS IN the coffee value chain are calling on government to honour its commitment of increasing investments in the coffee sector so as to meet its target of realizing $2 billion by 2030, which would require cultivating 220,000 hectares of coffee and a harvest of 900,000 tonnes.

According to the Coffee Federation of Ghana (CFG), achievement of targets set under tree crop policy that identified coffee as one of six crops to reduce the country’s over reliance on cocoa, could be hindered if special attention was not given to the sector.

“The federation is therefore calling on the government to expedite action on the creation of the division for coffee to facilitate the engagement of actors in the sector,” said Chief Nathaniel Ebo Nsarku, President of CFG.

He noted that Ghana’s coffee production, which is estimated to be about 1.4 tonnes per hectare, falls short of the targeted four to five tonnes per hectare set by government due to challenges that included lack of proper technical support and inadequate marketing techniques and lack of investment.

The sector, he indicated, was riddled with inadequate number of licensed Buying Companies (LBC) registered to engage in the internal purchasing and export of coffee as there currently existed only 30.

Increasing demands for roasted coffee locally, he said, provide opportunity for local manufacturers to generate revenue for the state.

The federation has therefore called on government to consider the prospects the sector has for Ghana in terms of the favourable weather for Robusta coffee and arable lands for its cultivation.

“In Ghana, coffee is mostly grown in about 10 out of the 16 regions. This means that there are large areas of land available for many to enter into coffee farming,” the president said.

It further urged government to as part of its policy to revamp the sector to approve regulations on coffee that were designed two years ago, use coffee cultivation as a means to reclaim galamsey lands, introduce crop insurance for farmers and also train more extension farmers for coffee farmers.

“Increase investment in the coffee subsector as this could create over 500,000 jobs across the value chain, promote sustainable farming methods and approaches as well as provide flexible, medium to long term financing for actors in the value chain,” he added.

Speaking on behalf of Coffee Exporters, Kwame Adu Tawiah, said that none of the 21 exporters of the Coffee Buyers and Exporters Association of Ghana (COBEA) had been able to export a container of coffee for the past six years due to lack of investment in the sector.

Am Moving To Ghana -Stevie Wonder