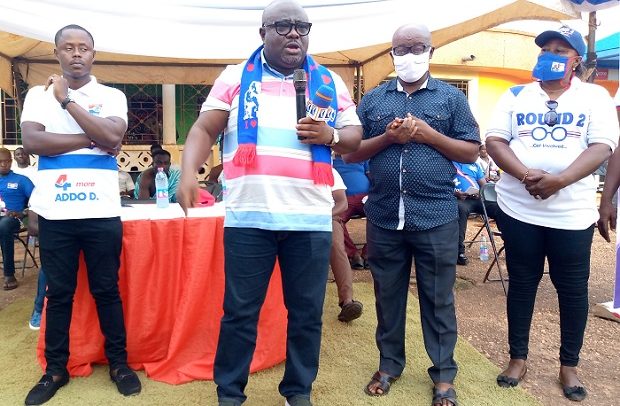 Kofi Amankwa-Manu (2nd from left) with some party officials

THE NEW Patriotic Party (NPP) parliamentary candidate for the Atwima Kwanwoma Constituency in the Ashanti Region, Kofi Amankwa-Manu, has tasked the campaign teams of the area to refrain from politics of insults as they solicit votes for the party.

He rather implored members of the teams to focus on communicating the smart policies and achievements of the Akufo-Addo government for a resounding victory, come December 7, 2020.

He said if the members of the National Democratic Congress (NDC) led by its flagbearer, John Dramani Mahama, had decided to insult their political opponents, the NPP members led by President Akufo-Addo would resolve to speak about their party policies.

Mr. Amankwa-Manu was speaking at the inauguration of electoral area campaign teams in the constituency at Apemanin-Kokoben recently to begin campaign activities for the 2020 presidential and parliamentary elections.

He said the formation of the electoral area campaign teams was aimed at ensuring the party wins 90 per cent of the votes for President Akufo-Addo to be maintained as the President and he as the MP.

The teams are to embark on a door-to-door campaign strategy to communicate the relevant policies of the NPP government, such as the Free Senior High School, One Village One Dam, Planting for Food and Jobs Programme, restoration of teacher trainees and nurses’ allowances, among others, to the people.

Interestingly, the aspiring MP was greeted with very enthusiastic supporters of both the NPP and the NDC in each of the areas he visited, an indication that they would vote massively for President Akufo-Addo to continue his good works.

He jabbed the NDC leader, saying governance is not about experiment and that Ghanaians are not ready to give John Dramani Mahama a second chance, considering the mess he created during his tenure.

The parliamentary candidate said Ghanaians are discerning people who will compare the achievements of President Akufo-Addo and John Mahama and vote decisively.

On his part, Prince Karikari, the constituency secretary of the party, urged the campaign teams to work hard to enable the NPP to retain power.

He described the inauguration of the campaign as ‘retailed campaign’ thus bringing the campaign to the doorstep of the people to explain to them the good policies of the NPP.