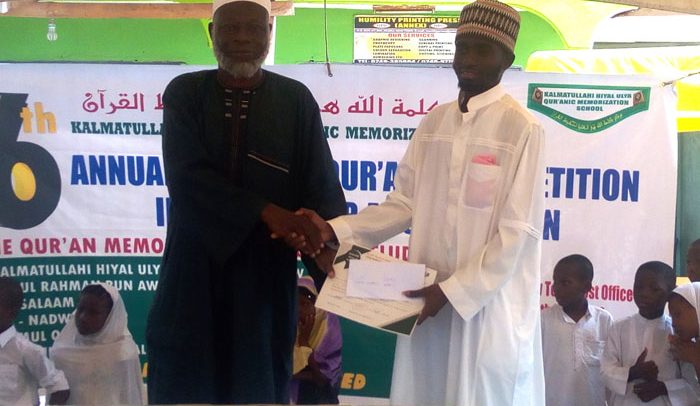 The winner, Mohammed Ridallah, receives a certificate at the event

A Computer Science student at the University of Energy and Natural Resources, Mohammed Ridallah, has been adjudged the best Quran memoriser at the 6th edition of the Annual Ramadan Quranic competition organised by Khalimatullah Hiyal Ulya, an Islamic Non-Governmental Organisation (NGO).

In all, there were five Islamic schools within the Greater Accra Region that contested in five categories of the competition.

The competition was aimed at motivating the Muslim youth to judiciously study and memorise the Quran so as to live a morally upright life.

Winners in the junior categories of the competition included Ibrahim Mohammed from Kalimatu Lahi as well as Lukman Masud., Tawfiq Mohammed and Abdul Wahab Jibril – all from An- Nadwa Islamic school.

In an interview with DAILY GUIDE, Mr Mohammed advised that people who intend to memorise the holy Quran should be ready to strive and make the necessary sacrifices and commitment as the act of memorisation required much discipline.

“Before I participated in this competition, I had to make sure I revised the entire Quran every two days within a one-week period,” he said.

A member of the organising team, Saka Salia, expressed the desire of the organisers to expand the competition to include more Islamic schools and also cover other regions of the country as well.

He therefore called on other Muslim entities to support the initiative in order to help the group achieve its vision for the betterment of the Initiative and Islamic religion.

Winners of the competition were awarded with different packages that ranged from educational scholarship, certificates, cash prizes, hampers and other home appliances and electronics such as television sets, fridges, fan, iron and laptops.